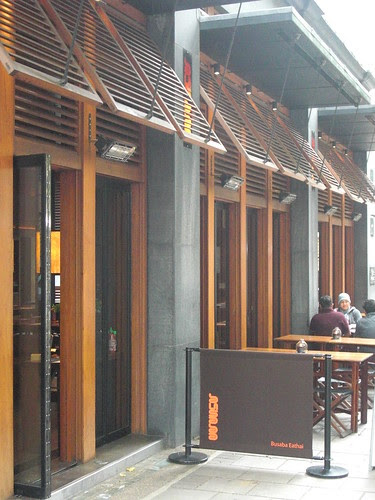 Busaba Eathai, an interesting assortment of words, probably formulated in a marketing company's wet dream. Oozing cool, with its simple but sleek image, it certainly has grasped the public's attention. Now located across three sites, the ever expanding Thai restaurant chain seems on the verge of bursting onto London's eat and go scene, much in the fashion of Wagamama.

I have actually long been a fan of Busaba. I have learned to avoid the Soho branch where queues have been known to stretch down Wardour street, and normally gravitate towards the Store street branch, conveniently located across from Goodge street station. This branch certainly is the image of cool. Tealights, gold buddhas and wooden interiors accompanies the all too familiar trend of communal dining tables. The staff, mostly attractive, young and predominantly foreign, were polite if a little distracted.

As I was dining alone, I was wondering how I would be able to fit in my favourites of pandan chicken and squid, normally suited for sharing. Lo and behold, the menu has shrunk! Not the selection, mind, this is still as extensive as ever. Instead these dishes have been made into side dishes so I could happily order them, (relatively) guilt free. 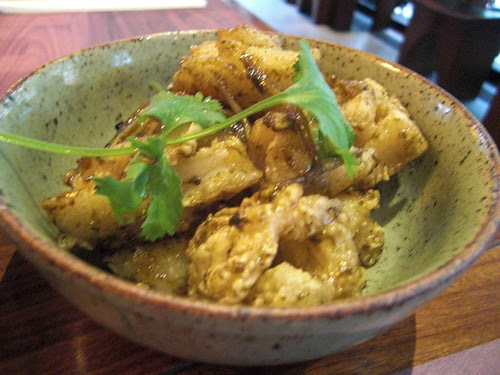 Strangely sweet nuggets of squid. I'm really not sure what makes these Thai, or what brings that strange sweetness to this dish, but I love it. The light batter is covered in that sticky sauce, with smatterings of peppercorns. Highly moreish. 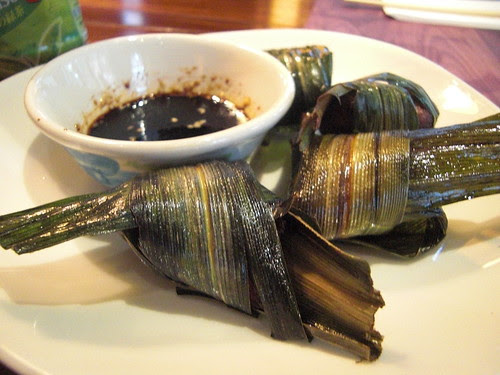 Morsels of chicken wrapped and roasted in pandan leaves. The roasting of the chicken in the pandan leaves imparts a slight flavour reminiscent of fennel, but slightly sweeter, hard to convey. The chicken was soft and tender and again, I really can't stop myself from eating this. Plenty of flavour, sauce is unneccesary in my eyes (but this is also coming from the person who doesn't use hoi sin in his aromatic duck pancakes). 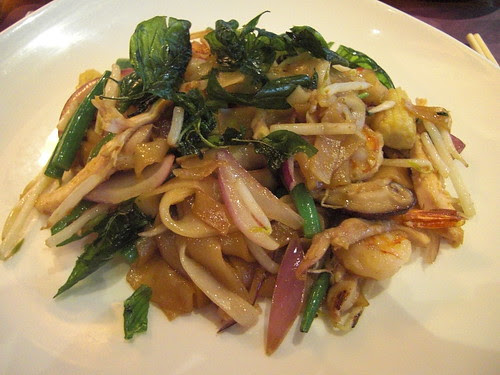 To finish, I decided to go for the pad kwetio. I would say that this dish has a stronger origin in Malaysia as opposed to Thailand (where char kway teow is a hokker stall standard), it is essentially a wok fried dish of flat noodles. Nice, inoffensive and perfect to fill the hole. One thing I had noticed is that the portions are definitely getting smaller. Fine when you are intentionally reducing the portion size (such as the chicken above) but not so acceptable when the prices are going up.

Busaba is a great place for a pit stop. It's quick, fairly inexpensive, and as long as you avoid the Wardour street branch, you should get a table with minimal fuss.

The calamari is excellent but you're right about portion sizes. My bowl of tom yum noodles was smaller than I remember.

But they don't have a dessert menu! Massive fail in my books, poor sweet tooth 'o mine :(

After a waiter at the Store Street branch tried to patronise me into believing that yes, a chicken jungle curry should be full of flabby, pimpled pieces of chicken skin, I vowed never to go again. He also asked me if I was making a fuss because it was too spicy for me. Pur-lease.