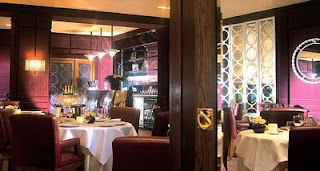 It's been a little while since my last post, not owing to laziness for once, but actually due to the fact that I really haven't done anything report worthy. There was a boat party (stationary) in aid of the NSPCC and a few parties in between, but frankly, these consisted mostly of slightly inebriated misbehaviour.

However, this week is going to be a gourmet extravaganza. Today I bring you Marcus Wareing at the Berkeley, which will closely be followed by Mandarin Kitchen, Tayyab's, The Wolseley and Pearl Liang to round things off. I intend on starving myself for the day's in-between!

I waltzed into the Berkeley and I must admit, first impressions were not great. It just felt a bit sterile and when I asked where the restaurant was, I basically got quite lost. After a few retracing of steps, I found myself in the main dining area where I immediately felt a little more at ease. The staff were polite and attentive (as you would expect) and brought me to my table in a quiet corner of the claret and brown bedecked dining room.

As I sat down, I was offered some aperitifs but I politely declined. It was a full 12 minutes later until somebody thought it might be a good idea to bring me a menu. This was thankfully the only glitch in an otherwise seamless service.

Having settled on the £35 set lunch menu, I sat back and waited for the show to start. Now, I am going to approach this slightly differently. As I have no pictures (the Maître'd instructed me that photography is strictly forbidden) I will have to try and describe each dish with words (this is going to be a tall order!). Any pictures you do see of the food are courtesy of Kang who runs a rather fine food blog, go check it out. Cheers Kang! 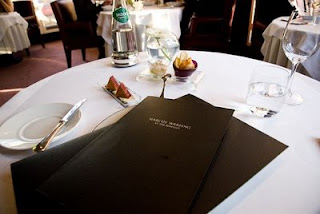 Canapés: Foie Gras Puff Pastry Triangles and Hummus with crisp toasts
Just to get the taste buds going whilst I perused the menu. I'm not a massive Foie Gras fan but these delicate little triangles were subtle and delicious. The hummus was nice, although the toasts were a little on the salty side. Can't complain though, these were nice enough.

Amuse Bouche: Sweetcorn Veloute with Tarragon Foam
Served in a tall shot glass, I was instructed to sip "like I would an espresso". The herby head of foam combined nicely with the sweet subtle taste of the warm sweetcorn veloute. It slid down a treat and was light and fresh. Bring on the first proper course!

Starter: Quail, Foie Gras and Pork Knuckle Ravioli with Black Potato Tea
I'm not a big fan of any of the main ingredients but that's the reason I come to places like this, for them to challenge my perception of food. It was very attractive when it arrived with the ravioli atop a bed of onions (?), supplanted by a rather cheffy green swirl and little white bits. Now, I know that doesn't really mean much, but upon tasting, I couldn't make out what either the green swirl or white bits were. Disappointing and seemingly unnecessary. However, the ravioli was lovely. The pasta was perfectly made and cooked, with just a little give. The filling was quite dense but the flavours married up well. I was expecting the pork to be quite overpowering but complimented the quail with the foie gras adding a slight creaminess to the dish. Very nice.

Main: 24Hr Slow Cooked Pork Belly with a Marcona almond puree, medley of courgettes
I love pork belly. I love it even more when it just falls apart with some gentle persuasion. The pork was delicious and highly unctuous. I had to stop myself from wolfing it down. The accompaniments were slightly disappointing. Although the almond puree was an interesting touch and went with the creaminess of the pork, the crackling (not as crispy as I had hoped and erring on the chewy side) and the courgettes (just not my favourite vegetable) were slightly lacking. 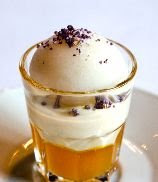 Palate Cleanser: Passion fruit Jelly with a Lemon mousse and Vodka and Lychee Sorbet
Absolutely delicious. Served in a single shot glass, it was a shame it wasn't a bit bigger. The slightly tart passion fruit was broken up with the sweeter lemon mousse and topped off with the zingingly fresh Lychee sorbet. It said there was vodka, I couldn't taste any and, TBH, if it was there, I don't think it would have added anything. 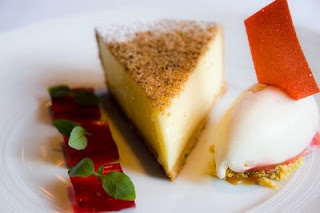 Dessert: Egg Custard Tart with Cranberry Jelly and Strawberry Swirl Ice Cream
Now this is the dessert that Marcus Wareing has become famous for. Served to the Queen during her birthday meal, courtesy of the Great British Menu, it really has quite a reputation to live up to. Arriving in front of me, it really is a picture. A perfectly asymmetrical slice of custard tart with a fine sprinkling of nutmeg, small cubes of cranberry jelly, placed with precision alongside the tart and a perfect quenelle of ice cream, half strawberry and half cream. I dove in. And was pretty disappointed. Now don't get me wrong, this was a nice tart, the flavours were good. But when it arrived in front of me, it was warm and yieldingly soft. Too soft, I don't think it had set properly. It literally disintegrated and could do with a few hours chilling. The rest of the dessert was very nice however, especially the ice cream which tasted reassuringly of strawberries and cream.

So that was that. A lovely, if not mind blowing meal. As I reflected on my rather worrying ever increasing belly, the Maître'd came over and wondered if I wanted to have a look around the kitchen. He must have seen me scribbling notes and mistaken me for someone important, but I really couldn't say no. So in I went and observed the team at work, all 20 of them. The brigade was quietly slick and efficient with the man himself marshalling them at the pass. I must admit, it was refreshing to see the chef actually cooking in his own restaurant!

All in all, even if the meal itself didn't quite set off fireworks, the whole experience was totally enjoyable. For a meal costing just over £40 all in, I thought it was good value and I will come again. Well, once I have got through all the other restaurants on my ever increasing list.

Great review, you did well with the descriptions :) sorry to see that the custard tart didnt live up to expectations - you should have sent it back, because when this one is done right, its rather magical.