Japanese food comes in many shapes and sizes. Over the years, I have tried various incarnations ranging from Sushi, to Teriyaki to Bento boxes to Tempura to Teppanyaki, the list goes on and on and on. However, one I had never tried was something I have only just come across and thats Okonomiyaki. Literally translated, it means "What you like"-"Grilled" and can be found at the Abeno chain of restaurants.

I decided to visit the Holborn branch as I had also intended on visiting the British Museum just round the corner. Very handy indeed. 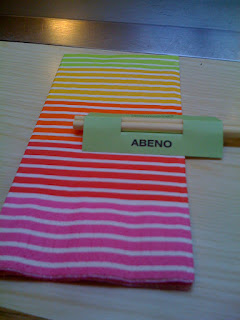 I arrived for a late lunch and was pleasantly surprised to find the place pretty busy. Its not a big place but most of the tables were still busy and there was a pleasant smell of grilling. This was unfortunately a smell I was going to become very familiar with.

I sat down and a menu was placed before me. Having done my research, I was here for one thing and one thing only so quickly glanced at the rest of the menu purely out of curiousity. And my oh my, do they seem to have a lot of dishes! Anyway, Lunch Menu C was ordered (a fairly hefty £10.80 for lunch) although again, there is quite a large variety on offer.

Whilst waiting for the main event, I was brought a bowl of Miso (not a bad attempt) and some chicken wings. Whilst I dug into these, they prepared the Okonomiyaki, or japanese version of a pancake, in 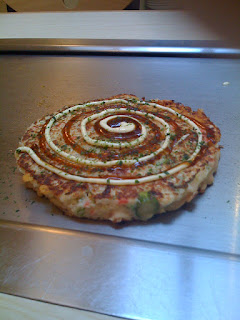 front of me. I went for their Shinshu Mix which comprised of chicken, asparagus and cheese. The waitress expertly ladled the mixture onto the hot plate and patiently cooked it in front of me. I was expecting a show a la Benihana's (well for the price, some theatrics wouldn't have gone amiss) but the cooking was fairly pedestrian. After a bit of flipping and a bit more grilling, it was ready. The final step appears to be covering it in as much crap as possible. A little bit of white stuff, some brown stuff, some dried seaweed, some fish flakes, some chilli sauce. Basically, enough stuff to make sure you couldnt actually taste the pancake itself. The brown stuff, as I was constantly reminded, was "Special" Okonomiyaki sauce. I tasted it. It tasted a bit like ketchup, but sweeter. Nothing special about it in the slightest.

As to the okonomiyaki itself, I couldnt help feeling that it needed a bit more cooking. It fealt a bit soft in the middle and I dont think it was cooked long enough on a hot enough hot plate. More like a lukewarm plate. It was so mushy in the middle, it felt like I was eating adult baby food.
As you can tell, I wasnt overly enamoured with my meal. It was alright, but thats all it was. For what it was, it was way too pricy and I would be reluctant to fork out so much again.

Oh, and back to the smell. I didnt notice it in the restaurant, but afterwards, it followed me everywhere I went. In fact, I can still smell it now. Not cool. 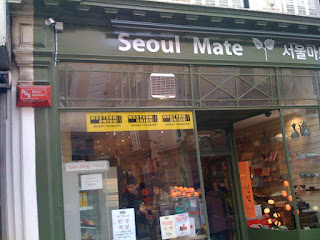 Just as an addendum, there are an awful lot of Asian shops in this area, which I found rather strange considering the vicinity to the British Museum. I saw this Korean Grocery store which made me laugh.
Incidentally, my attempt to visit the Babylon exhibition at the British Museum was in vain as it was sold out. I underestimated the power of half term. I never realised that so many teenagers were interested in ancient history. Oh well, will try again at a later date.
Posted by tehbus at February 16, 2009