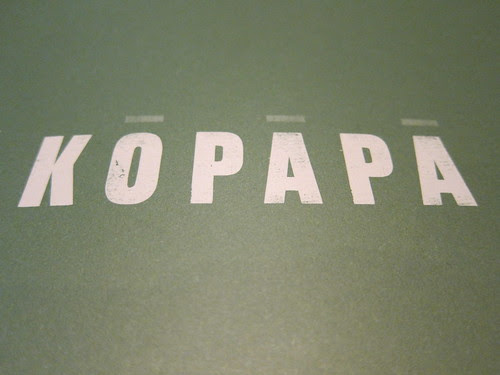 During my recent stint in between jobs, I decided to while away some of my time "down under". There I visited friends and family, eating well, taking in food from many of the cultures which make up the Australian population. "Fusion" was commonplace, with influences pulled in from all the surrounding cultures into one dish, a million miles away from dished painted with the same "fusion" brush here in London. Instead of chucking together a multitude of ingredients which cluttered the plate and didn't taste quite right, dishes appeared to be more carefully thought out and balanced. 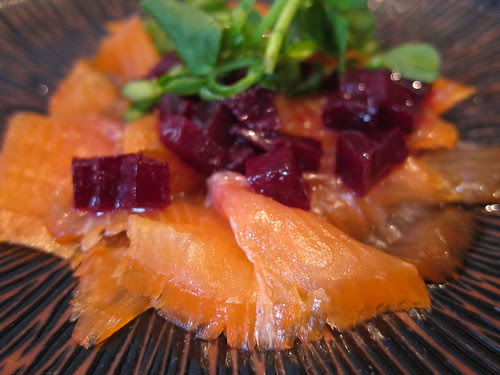 Smoked Salmon with a beetroot and yuzu dressing


Kopapa is a great example of how to bring these flavours together for a more Western palate. The brainchild of Peter Gordon (the Kiwi head chef of Providores), it opened it's doors in Seven Dials, an area of London which seems to be burgeoning with new restaurants and is handily located for a cheeky lunchtime jaunt. 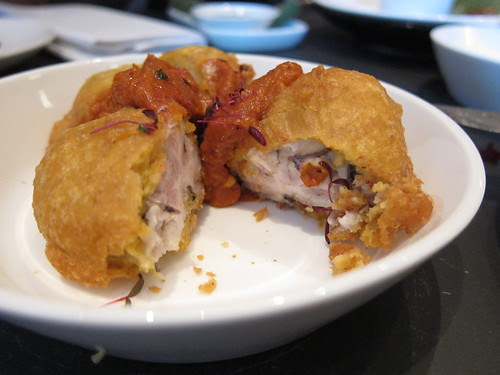 
On my first visit, I met up with a group of Covent Garden lunchers and we took advantage of their soft opening offer of 50% off. The menu on launch was highly adventurous including ingredients many may not have tried or heard of before (like betel leaf and yuzu), and more challenging cuts such as lambs brains. Split into small plates named "Ko-Tapas" and the more standard set up of starters/mains/desserts, we opted to road test the entire tapas side. 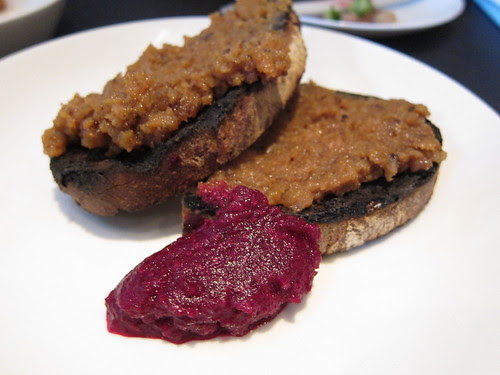 Bone Marrow and Parmesan on toast


Taking into consideration that this was only their second day, and two of our most desired dishes were unavailable as they had sold out (ribs and ox tongue), we really enjoyed our meal. The service was slow if friendly, but the food itself was decent. The highlights for me a delicious smoked salmon drenched in yuzu beetroot salsa, and slices of toast slathered with rich parmesan and bone marrow. There were disppointments with the steamed buns almost raw and items such as the duck liver parfait quite disappointing. On the whole though, everyone was pleased and actually excited by what we had tried, and I for one wanted to return. 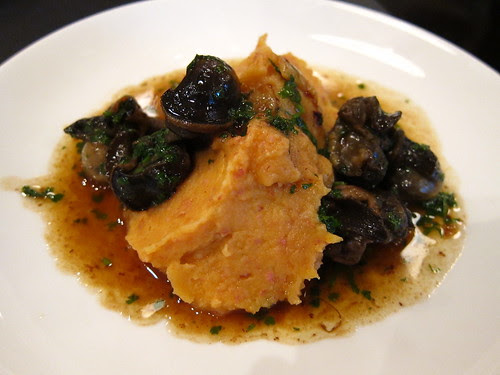 
So a few weeks later, return I did. A few of the more challenging items had disappeared (goodbye lambs brains, although they were a little on the bland side) and the rather poor buns from our first trip. Even looking at the menu today, it looks very different from my last visit, which keeps it interesting although may disappoint those who return for certain dishes. On this occasion, I managed to get my hands on the coconutty spare ribs and the crispy cheese filled ox tongue. Both were good, but the real star of the show were snails cooked in olorosso with a chorizo mash, a strange combination but incredibly moreish.
Kopapa is an interesting venture, and I certainly haven't tried anything like this in London before. Personally, I like it a lot. The prices are reasonable, and the food is exciting as well as tasting good. I will certainly be back and look forward to what's next on the ever constantly developing menu.
(Check out the rest of my Flickr series here)
Kopapa - 32-34 Monmouth Street, Seven Dials, Covent Garden WC2H 9HA

I too really like the concept but I think experiences are differing depending on the dishes - some are a little hit and miss at the moment. I love it for brunch, however. Like Providores, it is one of the few places in London that has really interesting breakfast/brunch options like those I'm used to coming from Aus.

I'm going here for dinner tomorrow night! Had brunch there on the weekend, LOVED it, hope dinner will be just as good.

@ Greedy Diva - I think that is the folly of restaurants who operate on a "small plate" basis. I don't think the place is going to win any awards, but I enjoy it for a quick dinner or lunch.

@ Catty - I must give the brunch a go