Before we start, I'm going to lay it out there, I am NOT a ramen expert just a man who has eaten and loved a lot of noodles in his life and can consider myself a noodle fan. Over the last 6 months, London has seen a sudden influx of ramen bars with a focus on the noodle soup, as opposed to relegating this to just another item on the menu. If you aren't acquainted, it is a combination of noodles, rich broth and an array of toppings normally and can be the most wonderful of dishes when executed perfectly. Here is my rundown of three of the Londons finest: 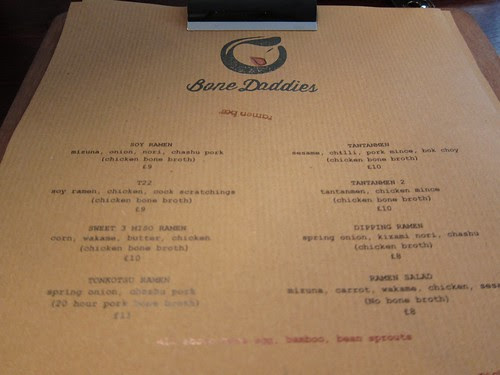 I guess you can say that Bonedaddies isn't your average ramen bar. Pumping out rock and roll (at a very acceptable decible level), it's all high tables, stools and shared dining space. The menu itself consists of eight variations, with two core broth varieties, pork and chicken. I've gone through most of the menu here and I normally opt for the Soy Ramen with some add ons (the chashu pork is delicious, but two meat ramen is always better than one meat). 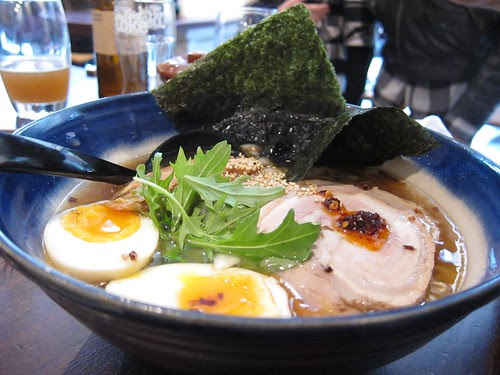 The noodles have bounce and are plentiful, swimming within a deep meaty broth. On top, a combination of pork or chicken as well as a variety of bamboo shoots, bean sprouts, corn, nori and mizuna. As you would expect from a chef who used to be head chef at one of the outlets of Nobu and Zuma, each bowl is beautifully presented and once you get into it, builds flavour with every mouthful. And the nitamago egg! Unlike the other ramen outlets, you get both halves of a wonderfully oozy soy infused egg. A joy. 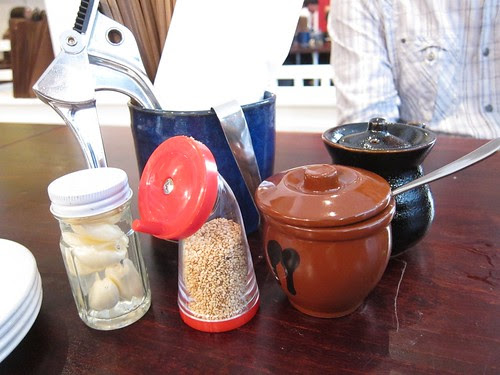 Bone Daddies delivers the full package on flavour and satisfaction. Each bowl is packed to the brim with different flavours and textures, and with the different varieties available as well as the rotating specials, you're never going to get bored. And any write up won't be complete without a hat tip to their fried chicken, soft shell crab and their chilli oil which are all excellent. 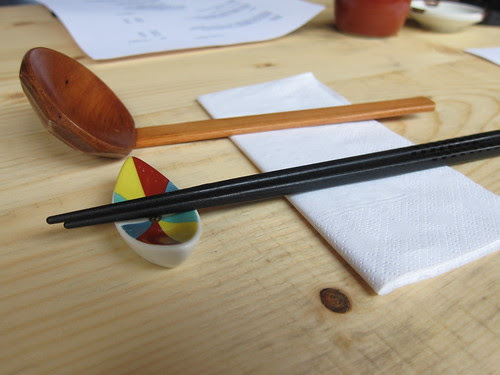 Tonkotsu is an offshoot of the successful Tsuru Sushi restaurants which are based around the city. Normally peddling sushi, katsu curry and a new kara age chicken burger, I was pretty intrigued how their incarnation of ramen would fare. 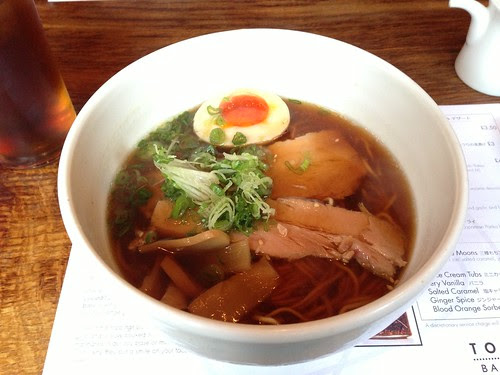 If you're going to name your restaurant after a product, it puts quite a bit of pressure on the product nailing it. Thankfully, the Tonkotsu ramen is a decent incarnation and a very welcoming bowl of noodles. Although early visits were pretty disappointing (weak broth, terrible service, tasteless pork), they seemed to have turned this around as my last visit was pretty good. My preferred option is the plainer soy version, which is still rich and deep in flavour. The tonkotsu can be a little too porky for me and a bit heavy for lunch. 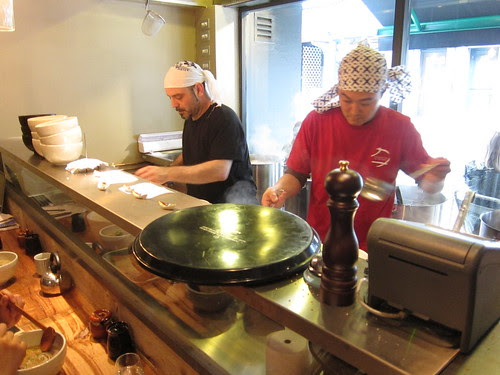 Tonkotsu is good but something seems to be lacking. The ramen is fine, with good broth and good noodles, I just found the toppings a little disappointing, with far less variety, content and ultimately, taste. The sides are also ok, but the chicken kara age is nothing to write home about. Maybe I'm missing something, but I am just not that into Tonkotsu. 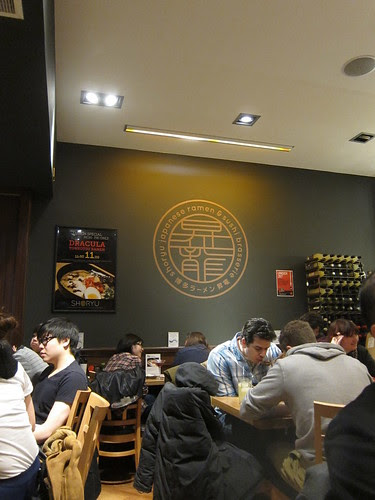 So, rounding off this soupy threesome is Shoryu. Arguably, Shoryu can claim to be the most authentic incarnation of a ramen house. Run by those folks across the road (Japan Center) and with a bona fide Japanese chef at the helm, I was fully expecting something great. Unlike the other ramen joints, the menu here is vast. Unlike Bone Daddies with their standard eight or so options, and Tonkotsu with a mere four varieties, Shoryu has more than both of the former combined, a monstrous 14 standard options. Not to mention the vast number of sides and starters too, you've got your work cut out deciding what you're going to have. 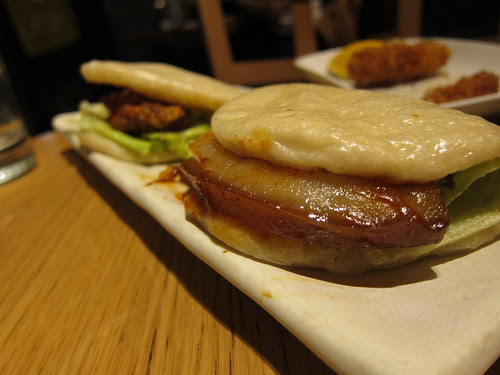 On my visit, the Hirata buns had to be tried. Much like ramen, these little steamed buns are making their presence felt on the London dining scene. As enjoyable as these were, these didn't quite stack up to the superior versions by street purveyors Yum Bun or Bao. For the novelty of it, we also ordered a side of Chikuwa fishcakes, an odd combination of battered fried fish and cheese. Strange but weirdly moreish. 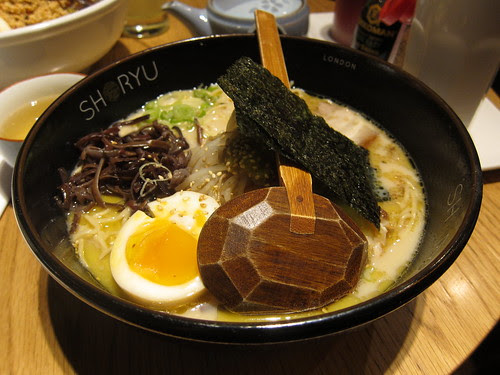 For the main event, I went for the Yuzu Tonkotsu, a pork tonkotsu broth with the added citrusy zest of yuzu. Surprisingly, these were perfect bedfellows, cutting through the rich broth. The toppings were mostly great, with a soft nitamago egg (although only half), pieces of nori, beansprouts and kikurage mushrooms. Sadly, the meat was slightly lacking in flavour, although this was the only real weakpoint to a great bowl of noodles.

The restaurant was buzzing, although there were a few core issues for me. I enjoyed the ramen, but all the tables and seats were ridiculously close to each other. But probably the biggest bug bear, that damn drum. Every time somebody paid their bill or got seen to their table, BOOM, there goes the drum. It was cute the first time, but after the tenth or so, it was extremely grating. Especially when you're trying to appreciate a perfectly good bowl of noodles.

So there you have it, three different ramen joints all with their own merits. It's clear that they won't appeal to everyone, with their bonging drums, dark interiors or rock and roll music, but considering where we were six months ago, we now have three ramen joints to choose from and slurp noodles at your convenience. Personally, after much research/slurping, I name Bone Daddies my favourite. I love the place, I love the ambience and most of all, I think their bowls of ramen are the most balanced with quality through toppings, broth and noodles. Well played.