See : The Taming of the Shrew @ The Novello Theatre 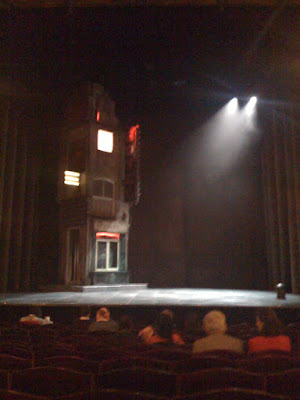 One of those things I enjoy doing but don’t do enough (like cooking, playing snooker, anything which involves any sort of effort etc...) is going to the theatre. This is for various reasons (including the fact that it involves effort on my behalf) but mainly due to costs. Going to the theatre and getting a decent seat involves money and often a lot of it. A seat in the stalls of a west end production is often in the region of £40 and upwards, making it pretty hard to justify for a night out. However, there are lots of good discount sites out there with limited offers and if you look hard enough, you can normally find a decent deal.

It is through one of these deals that I found myself in seat N12 at the Novello theatre about to watch the RSC's production of the Taming of the Shrew, slap bang in the middle of the stalls for a mere £20! If you haven’t signed up for lastminute.com emails, do it now. They often have some stonking deals as I found out.

The Taming of the Shrew is classed as one of Shakespeare’s comedy and centers around the marriages of the "shrew", Katherina, and her sister. The play is very much split into two with half centered around the marriage of Katherina to Petruchio and the subsequent "taming" of her and the second sub plot revolves around Bianca, the younger sister, and her suitors eventually leading to her marriage.

For a play which has been adapted many times in the modern day (such as "Kiss me Kate" and "10 Things I Hate About You"), it was always going to be interesting to see how the RSC was going to interpret Shakespeare’s words. In my eyes, this was a play of darkness and light. The light comes from the antics surrounding Bianca's suitors and the lengths they would go to gain her hand in marriage. This part was filled with great comedy moments, none more so than when the fake Lucentio introduces the fake Vincentio to his prospective father-in-law, Baptista Minola. Pure genius, you have to see it to believe it and had me in stitches.

The other part of the play is very much darkness to this light. This mainly revolves around the deconstruction of Katherina by Petruchio. I believe that this is where the phrase "killing with kindness" originates and we indeed see the transformation of a headstrong Kate into a whimpering and subservient Katherina. A star turn by Michelle Gomez of Green Wing fame makes it very hard to tear your eyes of her whenever she is on stage.

All in all, a really good production. I was engrossed for the entire 3 hour running time and it left me really thinking about what I had just seen and ultimately made me want to reread the play, just to revisit any of the nuances I may have missed in the play. It comes highly recommended and is only running till the 7th of March so catch it while you can.