Benitos Hat: It's all about the tequila One of the perks as a food blogger is that on occasion, you get a letter drop into your virtual inbox asking you to try a new restaurant or sample a few drinks. Many of these can be dull and no more than a simple PR exercise, but the odd one flies in and get your taste buds buzzing. When I was asked along to the new Benito’s Hat in Covent Garden to learn about tequila, make tequila cocktails and eat tacos, how could I say no?
Upon arrival, I immediately had one of their house cocktails thrust into my hand. The Paloma is slightly less "edgy" version of their standard margherita and was perfectly light and refreshing. After mingling and catching up with a few other people I recognised, we all soon settled down to an education in tequila from Alex, their consultant mixologist and teacher for the evening. 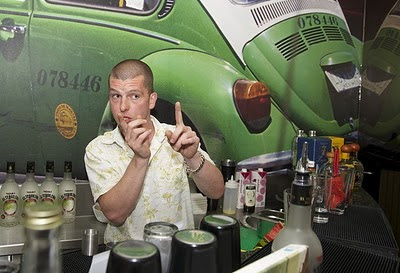 (taken by Tikichris)
A thoroughly fascinating 45 minutes followed. A potted history of tequila followed by a lowdown of all the house cocktails, with the enraptured crowd hoovering up the remains. If you ever pop in, I highly recommend the Juarez Summer Cup, a light summery drink akin to a Pimms, really delicious. After all that was said and done, we got down to the business end of this event, designing a tequila cocktail that will be on the Benito’s Hat menu for the next few months. We settled into teams and worked away, testing our creations. As you can imagine, copious amounts of tequila require copious amounts of food, and Ben certainly did not disappoint as an unlimited flow of tacos descended. Soft tortilla and a fantastic array of meaty fillings, they were delicious but merely a distraction as my team of Tikichris, Anniemole and Cowfish feverishly developed our cocktail....the TikiLa!
The TiKiLa:
2 parts tequila
1 part triple sec
1 part horchata
3 parts crushed watermelon
Agave syrup for extra sweetness (if needed)
Shake all the ingredients together with ice (adding agave syrup to sweeten if necessary) and strain into a tumbler over fresh ice. Edge and garnish the glass with a bruised mint leaf.
This was yet another competition I was never destined to win, but I did have great fun making sure the tequila balance in our cocktail was just right, as well as stuffing my face with tacos. I would definitely try out our cocktail; we were all big fans and will definitely be making it again in a less competitive environment. I have been quite an advocate of Benito’s Hat for quite some time. With the huge influx of restaurants peddling burritos and other food items of Mexican origin, you are going to get your fair share of "bad heuvos". Alongside Chilango, I don't really think that there are any better, and since I work a mere two minutes away, you will often see me in the queue sampling one of their excellent chicken tacos. Thanks Ben and keep up the good work!
Benitos Hat - 19 New Row, Covent Garden WC2N
(for a more booze focused account of this event, please check out Billys Booze Blog)

(Does that count or do I have to make up my own song?)

That doesn't count!
You have to
A) Make your own song
B) Adapt it to the music of an exisiting one
C) Make a video and post it on YouTube.

I still need to try Chilango, but have been so discouraged by other Mexican places I've tried in London that I really lost all hope in the burrito for a while. But I tried the Benito's Hat pork burrito last week and it was awesome. I can also vouch for the margaritas but that's a long story....

Mate you should get yourself down to that Elephant food market on Sundays and see if you can find the Buen Provecho guy. Best damn tacos I ever ate.

Was the event all full of bloggers? The bar staff must have wondered what had hit them as you all took copious amounts of photos!

I had a margarita at Mestizo recently and ignoring some of the ridiculous flavours offered as part of their Margarita festival, their classic on the rocks was great. Just the right amount of salt and crystaal size.

I'm a new reader but am enjoying the blog.

@G&C and BWF - You need to maintain your crazy comments otherwise you are only a one of loon.

@GD - I have found that the burritos in London vary greatly, but there are a few very nice ones from the chaff.

@Helen - I walked past him in Waterloo but just after I had eaten lunch. I will find him again!

@Miss Orchid - It was a blogger event which was organised before the restaurant had actually opened. I have been back a fair few times (sans camera) and still love it :)