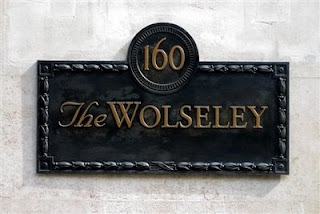 One of the things that New Yorkers seem to “do” better than Londoners is breakfast. Here we have our “Eat” and “Prêt” churning our packaged bacon rolls and of course our notorious greasy spoons, with their builder’s tea and full breakfasts smothered in beans. When I was last over in NY, my cousin took me to numerous diners and upmarket café’s catering to the breakfast/brunch crowd. Apparently this scene is big over there.

So one of the things she asked me to do when she was over last week was to take her out for breakfast. I pondered for a short while and settled on The Wolseley.

Situated next door to the Ritz, my impression of this place is grandeur and old world splendour. Walking into the rather spacious open main dining room, it really did remind me a bit of walking into Grand Central station for the first time. My cousin should feel right at home! 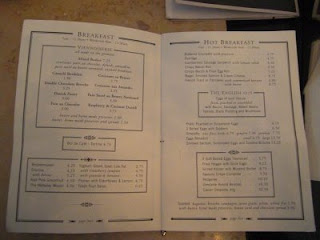 So, as we were here for brunch, I had already scoped out what I wanted on their website. We were accompanied by a child, so the parents were busy trying to get her comfortable and happy ,and thankfully the staff were patient with us. Once the ordering started, between us (sister no 2 had joined , we pretty much covered all the bases. 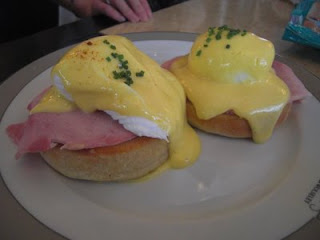 Cousin ordered the Eggs Benedict. Being the Chinese family that we are, anything you order is fair game so we all dug in to each others dishes like they were our own. I've never been the biggest fan of Eggs Benedict but these were cooked very well. The eggs were still nicely runny and the hollandaise had the required tangy vinegary kick. Muffins were a bit chewy. 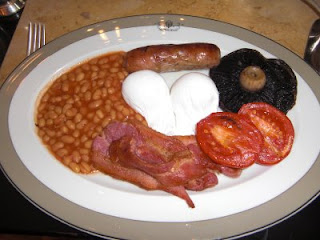 Sister no 2 opted for the full English sans black pudding. She’s not an offal fan, and I know this will horrify many of the foodies out there, but I can’t say I do either. As she is notorious to having eyes bigger than her stomach, I got to sample most of this and although pretty pleasant, it wasn’t mind blowing. I wasn’t really sure what to expect, but at nearly £14, I would have hoped for fireworks. 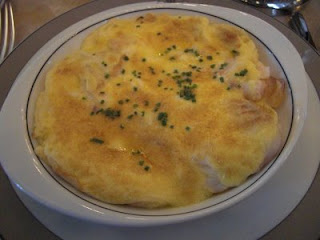 I went for the Omelette Arnold Bennet. Being one of the Wolseley’s signature dishes, this is an omelette composed of eggs (durr), smoked haddock, parmesan and cream. I'm a bit of a late starter when it comes to fish. I pretty much ignored it when I was a child and now, as I reach my thirties, I have only just come around to the idea. That aside, this was delicious. The generous flakes of haddock strangely went rather well with the creamy cheesiness in the omelette. A strange combination when you say it out loud but absolute heaven on the palette.

No matter how good this was, the real star of the show was the bacon and pancakes. No picture, so you are going to have to visualise these, but they were big, fluffy and light with perfectly cooked crispy streaky bacon rashers. My cousin’s husband is a typical New Yorker and is extremely fussy about his food, but even he couldn’t complain about these. In fact, he said they were the best he had ever tasted.

All in all, it was a really good meal. Although the service was sketchy in places (the age old “over attentive” the one minute and then almost invisibility the next) it was an enjoyable and relaxed experience. No celebs this time round but I will be sure to keep my eye open on my next visit.
The Wolseley (website)
160 Piccadilly, W1J 9EB

I must say I'm not particularly crazy about offal either but I think i've not really given it much of a chance. Perhaps give St John a try? I found the service a bit hit and miss too at The Wolseley when I had afternoon tea there a while back. I must go back for breakfast, those pancakes sound great!

As an American in London, I have to say that - at least of a long time - I did pine away for a proper NYC style brunch in London (that cost less than £20!).

Thankfully, there are now quite a few options for weekend breakfast/brunch places in London town.

I have been to the Wolseley a few times (3, I think), and it certainly is a place that fixes expectations high given the wonderfully grand interior and the prices. I have enjoyed it each time, but am always slightly let down by something or other, and think it's too pricey (guess you are just paying for their rent, celeb spotting, and...their margins?).

Some other places to try next time you fancy brunchy stuff are: Automat (also pricey but generally pretty solid), Violette Cafe in Belsize Park (which has extremely consistent breakfast offerings - I have been going there for years - and is surprisingly still relatively unknown), and Lucky Seven just up from Westbourne Grove (which, incidentally, makes some of the best burgers in London).

Some other places to consider would be The Providores in Marylebone High Street and the newly opened Daylesford Organic in Westbourne Grove.

LF - Thanks for the recs. Been wanting to check out automat for a while. Living in S London, the others are a little bit of a trek to get to in time for Brunch but will check them out if ever in the area.