Once upon a time, in the realm of twitter, numerous knights from across the land lauded over their respective kingdoms, regaling tales of long lost comestible treasures, of villages where the food was made of ambrosia and their villagers owners of the heralded silver tongues. 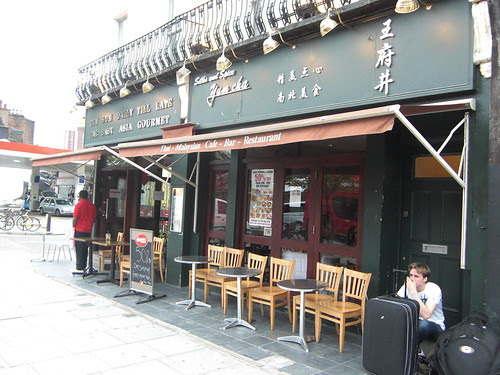 The fair knight Tehbus surveyed his Kingdom. From within his castle housed in glass, he was envious. Far and wide, tales of wonderful coffee, perfect sandwiches and meals fit for emperors permeated his castle. And all he had was his faithful supplier, M&S, and on special occasions, feasts of chicken provided by Sir Nando's. Then one day, rumours spread amongst the kingdoms that a horde of dumplings so divine could be found at the far reaches of the twitterverse. The location, Castle Yum Cha in the Kingdom of Camden.

Knights were recruited from all over the twitterverse but the path to the divine dim sum was fraught with danger. Some were accosted en route by the evil kettle tribe, laying waste with barrages of boiling water, whilst others were waylaid as they had to tend to their villagers. The plague was particularly virulent at the moment (rumours had it that the swine folk were responsible) and many other would-be adventurers were unable to make the journey . Only three brave souls made it to the Kingdom of Camden and prepared to assault Castle Yum Cha. Madam Catty of Oz and Supercharz joined the Tehbus and the battle to conquer Yum Cha commenced.

Wave after wave of Dim Sum arrived. First to take on the brave souls were squid of chilli and garlic and the Wu Kok. Fearsome as they were, these were swiftly despatched. The smooth yam encasing a succulent combination of pork and vegetables whilst the squid were crispy but yielding, containing plenty of flavour from the garlic and chilli. 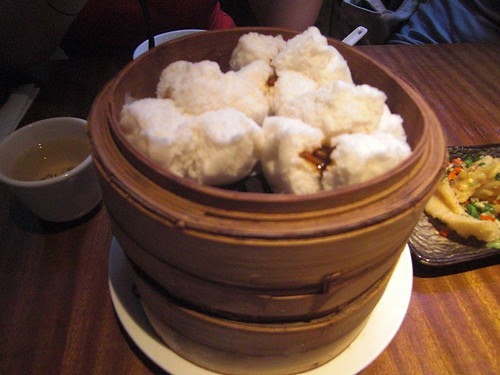 As we entered deeper into the meal, we were faced with our first tower of steamed goodness. Char Siu Pau were sweet, savoury and soft all at the same time, whilst lotus leaf rice moist, if unassuming. 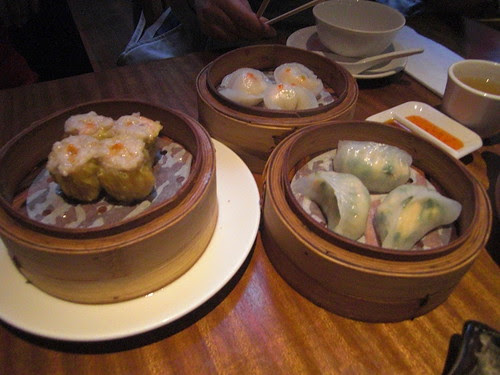 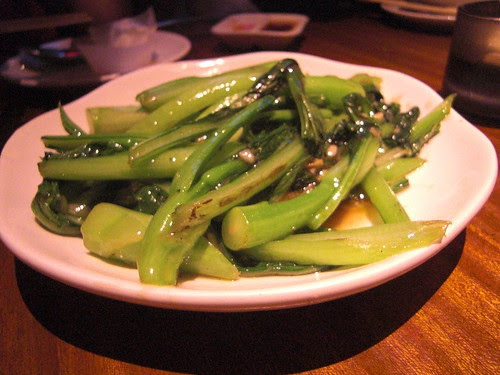 Next, a trio of dumplings. These were fierce competitors, but soon defeated. They were no contest for the appetites of the fateful three. Finally, they were faced with the most dreaded of enemies, choy sum. Tehbus shuddered. Only 6 months ago, he had been conquered by this green vegetable but 6 months was a long time. Since then, hours of training had got him to a stage where conquering this enemy would be easy, enjoyable even. The savouriness of the sauce and the hit of the garlic were strong, too strong some might say, but the Tehbus revelled in it and polished it off, never to be seen again

The battle was won, Yum Cha had been defeated. 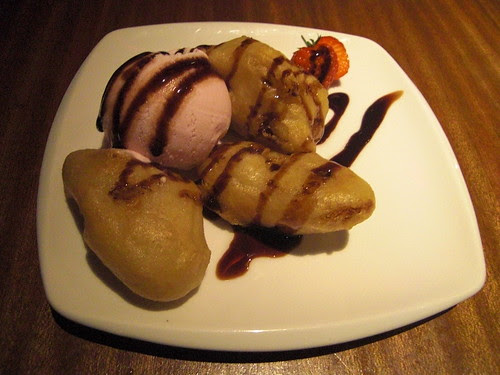 To celebrate, stomachs almost full, the fateful three decided to indulge in desserts of coconut, mango and banana. Yum Cha had indeed lived up to its fearsome reputation. Although we learned that the full army is not available in the evenings, a 50% offer softened the blow.

At the start of this journey, although the aim had been to explore new lands and defeat an old enemy, the journey was more about discovery and a bond was made between the three fateful adventurers. As the dust settled, these three sat round the fire and chatted deep into the night. The first adventure of many, the journey had only just begun.

Excellent writeup! I'm so sorry I missed it. You wouldn't have wanted my plague though...

Do you work close enough to Yum Cha to manage a lunchtime visit some time?

LOL cute review :) The battle was won indeed, I slept SO well last night on my full belly :) 'Twas great to meet you!

Damn that evil kettle tribe and their boiling ways! I'm gutted I missed this but I hear the evening menu was rather limited. A return visit at normal dim sum hours needed perhaps.

@Kake - Unfortunately not. Im sure another tweatup will be arranged in the near future. Will let you know.

@Helen - No cheung fun. Says it all really.

No cheung fun? Nightmare! Gutted to miss this. Evil laptop, making me spend money on it instead of pretty things like dim sum, clothes and shoes. Harrrumph.

Hilarious! I had great fun reading that. Can almost imagine those characters through your words. Dimsum will never be the same again. :)

Had this during a weekday afternoon. It was a bit quiet when we arrived. I thought that the dimsum can be a little warmer. Also, I noticed that the staff doesn't usually help remove the lid from our bamboo container. Hmm. But it's more affordable than most other dimsum outlet.