Seeing the sights at Skylon 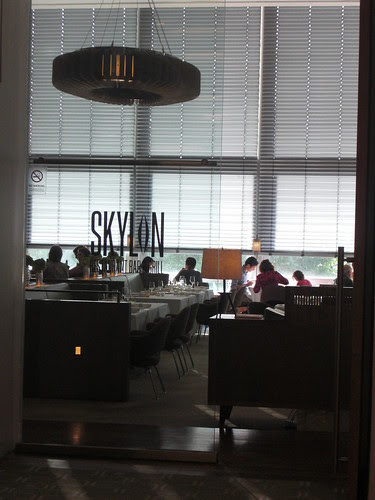 In 1951, London welcomed the Festival of Britain, and much of the Southbank was developed as the principal exhibition site for this momentous event. Where once were warehouses, sprang buildings designed by the leading British architects of that day. Amongst others, this included the Royal Festival Hall (the only remaining building from that exhibition) and the Skylon, a steel and aluminium shaped cigar suspended by wires. What better a way to celebrate Britishness than by erecting a giant pointless metal structure which was dismantled just a year later.

Where am I going with this? Well, its all about Skylon, innit! Located on the 3rd floor of the Royal Festival Hall, it has both a main restaurant, serving “haute” cuisine, and a grill serving lighter more regular fare, a popular trend amongst upper end restaurants these days. In addition, it contains a pretty spectacular view. Although the blinds were quite low as the sun was out, the view from Skylon spans much of the Thames and its highlights. You know what they say, if you eat with your eyes, I had already eaten the equivalent of a starter before even sitting down. 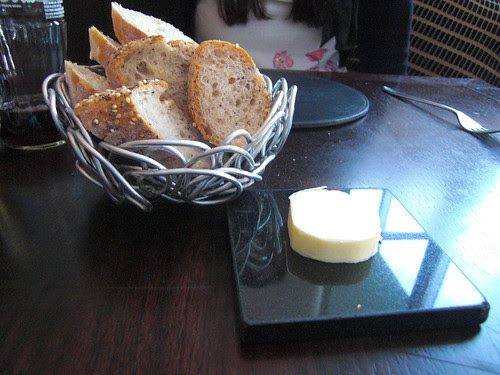 The night contained the many wonders that is Beardyman, so a quick and filling meal was the order of the day. The main restaurants going to have to wait, Grill it was. Bread down (which incidentally was chewy, but worth every ounce of effort), we perused the menu and ordered.

So, to start a Chicken and Ham Hock salad: 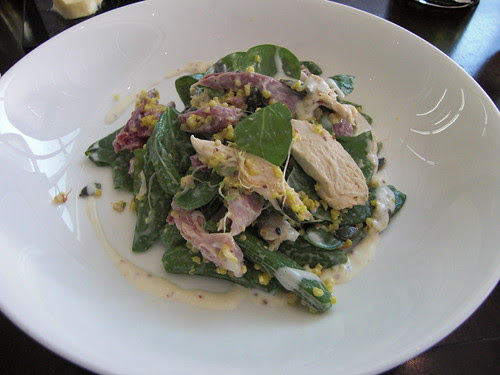 This was the business, where do I start? Shreds of chicken that actually taste of chicken, none of that battery farmed, pumped full of water chicken here. The ham hock was reassuringly salty and tender. The sugar snap peas were crisp and so fresh that it lit up my palate. To bulk it up, alfalfa and baby spinach, accompanied by a grain of sorts (quinoa?). All smothered in a velvety mustard dressing, this really was the highlight of the meal and probably one of the more enjoyable dishes I have had this year. 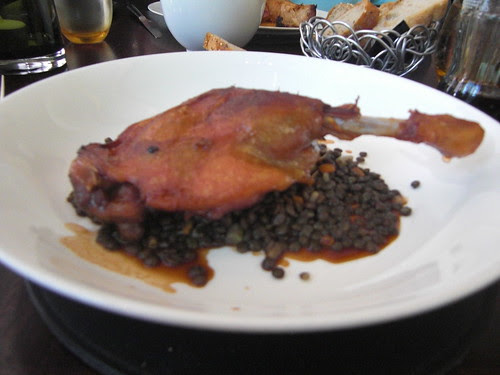 I snaffled some. I would say that the duck was above average but nothing outstanding. Crispy little nuggets of skin are always the highlight for me, and this had a few. Puy lentils had lots of flavour, presumably cooked in stock. Bit hard though, could have done with a few more minutes. 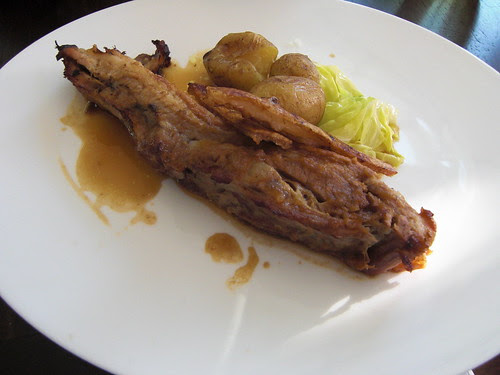 It's not the prettiest thing to look at, is it? But it was oh so good. The meat just fell apart and was lubricated by a delicate gravy with serious apple undertones, a nice alternative to lumping a load of apple sauce all over the meat (which I invariably do if apple sauce is to hand). The requisite crackling passed the test. Firm without breaking the old gnashers. The greens were ok but the potatoes were a bit rubbish. I mean, what is pommes Alsace anyway? If this is how they do potatoes in Alsace, I don't really want to eat there. The pommes frites we ordered on the side were much better. Probably not of the triple cooked variety, but crisp and seriously moreish.

On the whole, thumbs up. Each main cost just over a tenner so it's really not going to break the bank. The food here is clearly cooked by an accomplished kitchen and I would love to return to try out what's on offer in the main kitchen. As I left, it seemed strange to me that a restaurant run by a Finn cooking predominantly French food is located in the remnants of what represented Britain in the 50's. There is talk of another Skylon being erected on the Southbank. For the time being, I'm quite satisfied with this one.

Confit duck looks yum! But then again I'm a confit duck whore, I would eat that anywhere hehe. We've been meaning to check out Skylon for a while, so you think it's a go-er? Read an article about the Finn chef somewhere, she sounds pretty good.

I enjoyed it. Definitely going to head back and try out the main restaurant.