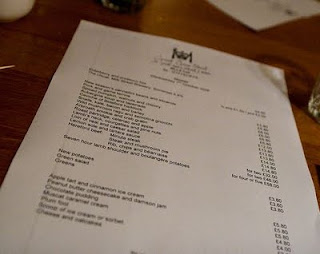 Sometimes the urge to eat beef just takes you. This week, I had one of those moments, where the caveman instinct to consume unhealthy amounts of red meat consumes you, I had to find me a steak. I didn't want to go anywhere I had already been so Gaucho, Sophies and Hawksmoor were off the menu. I desperately wanted to try out Goodman, the new kid on the block, but it appeared that I wasn't the only one and failed to get a reservation. Other options were Buen Ayre (in Broadway Market, too far away) and Black and Blue (alongside a suggestion of Angus Steakhouse, you know who you are) but when I heard that Great Queen Street did a Rib of Beef for 2, I was sold.

Great Queen Street is located on the premises of one of my old haunts, back in the day when I used to work in Holborn. Formerly the Rampage, much has changed. Gone are the TV's and the ghastly wall paintings to be replaced by simple and functional wooden furniture. The ambiance is buzzing and the room is filled with 30 somethings as opposed to the 20 year olds who used to come here for for their post work pint. Sister restaurant to the Anchor and Hope on the Cut, this has one major advantage. Here you can actually book a table.

I ordered a pint of "The Usual" (yes, that really is the name of their ale) and sat down to decide what to eat. The menu is simple and straightforward, showcasing good British produce. The friendly and young waitress expertly reeled off a list of highly appetising daily specials, I think even the fussiest of eaters will be catered for in one way or another. The choice of mains had long been decided, but what else were we going to have? 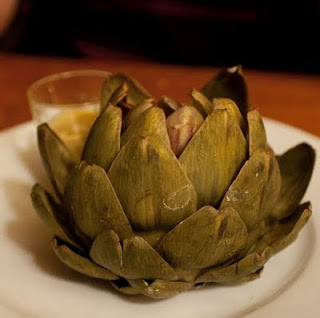 Globe Artichoke and Vinaigrette - A single cooked globe artichoke is, in my eyes, a thing of beauty. Cooked simply and served with a tangy and sharp vinaigrette, we dove in and started tearing away at the leaves, dipping then stripping the parsimonious "flesh" at the bottom of each leaf, before we finally arrived at the plentiful bounty that is the heart. A really satisfying experience on so many levels. 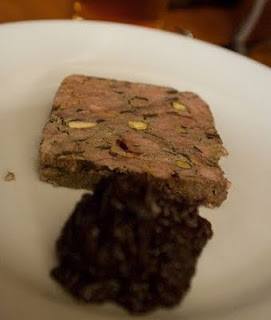 Pork and Game Terrine with Gooseberry Chutney - A lovely rustic slab studded with pistachio nuts. Served with a really good sourdough and unsalted butter, the terrine was slightly dry, but it was full of meaty chunks with the distinct hammy pieces of pork standing out. The gooseberry chutney, sweet and deliciously sour was the perfect match for the rich and smooth terrine. 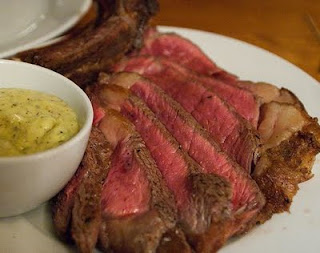 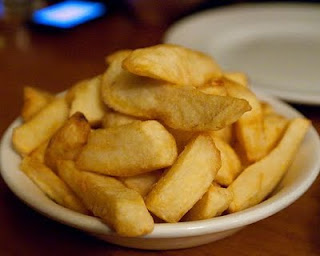 Hereford Beef Rib for 2 with Chips and Bearnaise - And here it is, the main event and the reason we came here in the first place. And I am glad to say, I wasn't let down. At £46 for two, this is easily the most expensive thing on the menu but was a thing of beauty. The beef arrived in rare slabs with an actual rib on the side. It was probably a little too rare for me but not so much that I was put off. The meat itself had generous slivers of fat, leaching flavour into the beef and was well seasoned with a healthy char. Slightly chewy, each mouthful was juicy and delicious. The accompanying Bearnaise was a worthy sidekick, smooth with a sharp tarragon tang. Chips, so often a letdown, were also highly accomplished. Soft fluffy clouds of potato encased in a crisp golden shell.

After that mountain of meat, we were all stuffed to the gills. However, my eyes are bigger than my stomach and the urge for something sweet meant that I ended up ordering a scoop of espresso and milk ice cream. Good strong coffee flavour with a sweetness from the milk aspect of the ice-cream. A nice punctuation to a highly fulfilling meal.

When they closed down the Rampage, myself and many of my old workmates were disappointed. After all, one of our old haunts was now out of commission. However, this is definitely a case of an ugly caterpillar blooming into a vibrant butterfly. The Rampage used to serve perfectly decent Thai food, but what we have now is top notch British food, in a comfortable and buzzy environment. I can't wait to come back, this may yet become my local once again.

P.S. In case you were wondering, I haven't become an amazing photographer overnight. My feeble point and click couldn't handle the "ambient lighting" so I stole some off @foodbymark. Check out the rest of his pics here.

I absolutely love this place, particularly its consistency, which has surprised me over the last 5 or so years.

I knew nothing of its former guise, I've only ever known it as 32 GQS, but am bouyed to know that a gastro conversion has improved the place!

In my mind, they excel at this sort of simple stuff, their grouse was tasty, last time I had a stuffed saddle of hare which was gorgeous.

Am very jealous of the rib, it looks perfect, and the chips...oh chips, you're right, so often a letdown, glad they had the same attention lavished on them.

I remember the Rampage too!

Nice rib of beef. And the artichoke doesn't look half bad either. And well done Mark for the photos. They're very sharp.

You did end up using my photos! I've started writing this one up, mine will be up next week.

Oh that beef! Beefy goodness. I bet it was melt in the mouth. I can't believe I still haven't been here...