Picture the scene. I'm sitting in a pub in deepest darkest Soho. I have just been served a strange foreign beer by a heavily tattooed woman, decorated with a variety of adornments pierced through her nose, ears, lip and any other appendage which dares hang loose from her body. Just when I think the evening couldn't get any stranger, I meet a mysterious Spaniard who is experiencing "troubles". Of what nature, your guess is as good as mine. As usual, in any awkward conversation, I try to bring it back to my comfort zone. So I attempt to pester him about food to get his mind off whatever is bothering him. Eventually he reveals that Iberica is his favourite restaurant before descending into the dark fug which is beginning to form around him. I get away before I get drawn into this ever evolving downward spiral.

So, a couple months down the line, I received an email from Urbanspoon asking me if I want to give Iberica a go. Fate? Probably not, but I'm going to go anyway. If any of you don't know what Urbanspoon are, they are essentially a place to find somewhere to eat, with reviews supplied by the public to help make up their minds. I contribute to Urbanspoon and they post my reviews and send me readers. I scratch your back and you scratch mine.

Iberica is located at the upper end of Great Portland Street and is a formidable space. It's massive windows and numerous light fixtures lend to a lofty and bright dining room. Inside, it is broken up into various sectors, with a generous bar area, surrounding tables, a dedicated dining area towards the back and newly opened fine dining restaurant upstairs (called Caleya).

We sat down and had a chat with Marco, one of the joint owners. Here he regaled a few stories about how the restaurant came to be, and of the effort that he had gone to ensure that Iberica was Spanish through and through. This included the tiles in the bathroom to the lampshades, designed by a Spanish lampshade designer! When it comes to the food, not everything can be sourced from Spain. Where it was too difficult or cost ineffective, they try to find alternative local sources. This ranges from the Galician chicken (which are allowed to roam wild to create a more muscular meat, almost resembling red meat) which they convinced a British farmer to start breeding for them, to the Hake, which comes from Dorset but is swapped with the Spanish fishermen out on the seas. 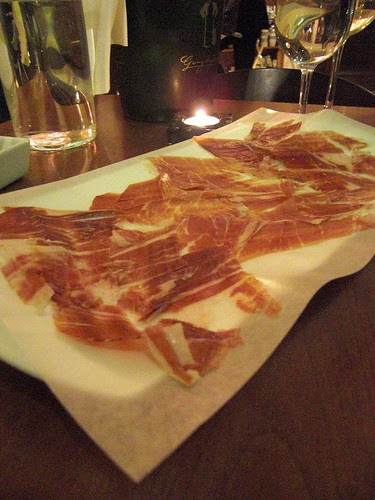 We were ravenous by now, so started with the trio of Iberican ham with a glass of Tio Pepe sherry to accompany it. Smooth, with the nutty flavour running through the fat only found due to the pigs diet of acorns. Expertly sliced into thin slices, this didn't last long but was a noble prelude to the meal. The sherry was dry and intensely woody, nice, but I think I still need a bit of convincing to convert to a sherry drinker. 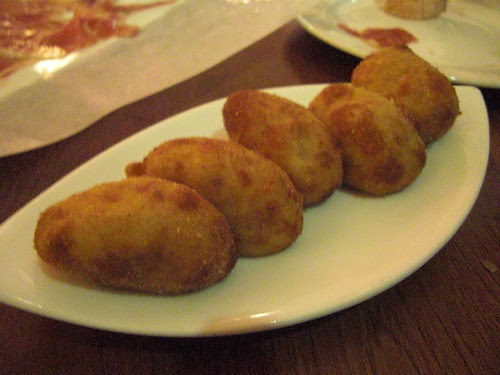 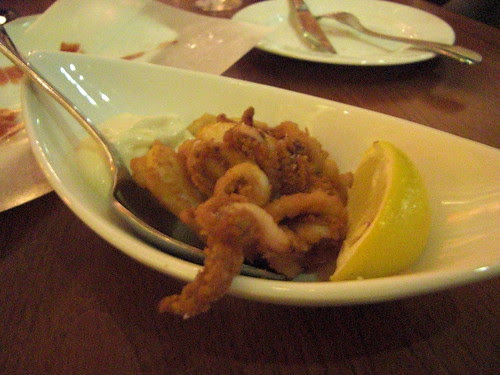 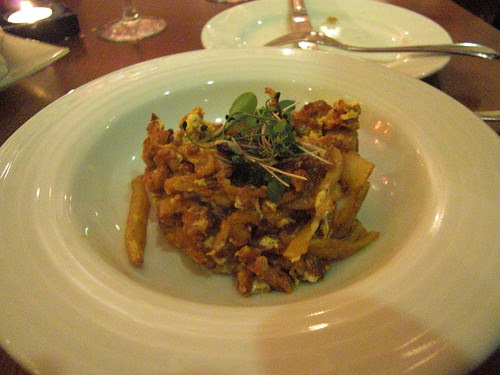 As soon as we had consumed the ham, our next trio of dishes arrived. The ham croquettes were luxuriously viscous, studded with ham and covered in fine breadcrumbs. I have no idea how they got them onto the plate in one piece, they were so fragile. Calamari were accurate with a light batter and a gum sucking dollop of alioli to help it down. The "broken eggs" with chorizo was probably the most interesting dish. The chorizo appears lightly fried with the panadera potatoes, their oil staining the potatoes a slight crimson, and finished off with an egg mixed in. A really hearty dish, although the level of salt had me reaching for the water more than once. 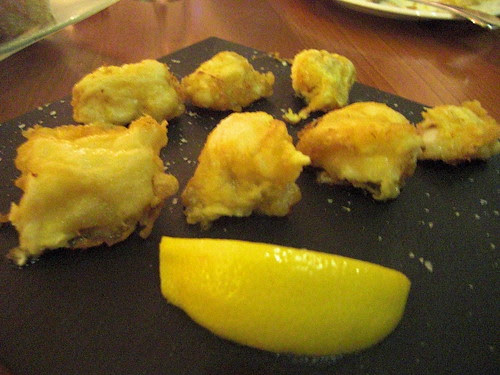 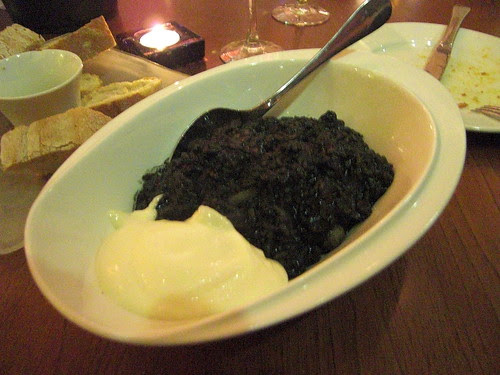 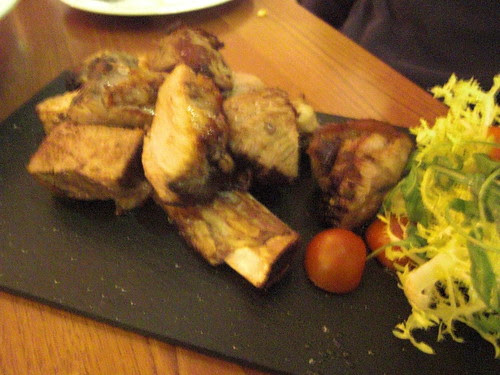 (I realise that the quality of the pictures deteriorate somewhat during the night. This may have been due to the fading light, or the increased consumption of wine)

Onto the larger dishes. Here we had monkfish parcels, squid ink cooked rice, and a churrasco (rib of beef). We hadn't actually wanted monkfish, but the hake had proven to be rather popular and had been sold out. The monkfish was incredibly meaty, and just needed a squeeze of lemon to bring out all its flavour. I have never had anything with squid ink before, but its use in cooking the rice adds a hint of the sea, whilst giving the rice a creamy texture. Thrown in a few prawns and few pieces of the aforementioned squid and you have an extremely tasty dish. However, be warned. It is incredibly heavy, I was struggling after a few mouthfuls. Last but not least, the churrasco, a steal at £8.95. By this stage, we were beaten, destroyed by the multitude of courses before us, but I had a mouthful for the cause and I can certainly vouch for the beef. Cooked for 2 days, its tender and moist, infused with the flavours of rosemary and garlic.

I can see where the mysterious Spaniard was coming from. He may be a troubled young man but he certainly knows the food of his homeland. Iberica is a great restaurant selling fantastic tasty food. It may be a little out of the way, but it was packed to the gills. I think that probably tells it's own story.

Is great portland street out of the way? I suppose it is off Oxford Street...

I am sad that I didn't manage to eat here before my 50% off taste london card ran out, but given your review, it sounds like it's worth paying full price. Mmmm squid ink rice...

@lizzie It's sort of out of the way. Nearer Regent's Park than Oxford Street. And I am immensely lazy!

I want the meaty monkfish!

Thought it was brilliant last night. Great tapas... not so much out of the way if you're coming Great Portland Street mind.