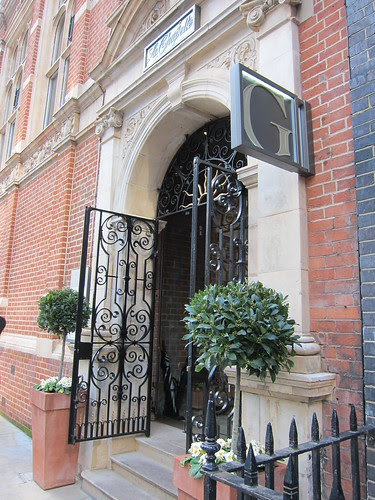 My old school was like no ordinary school. I mean, lessons were alright, but when it comes to what I remember most, it would have to be lunchtimes. Every day we would queue patiently outside the canteen, waiting to be fed, until we were ushered one by one to go and receive our daily sustenance. Most kids may have dreaded this part of the day, but Adrian, the "head chef", led a brigade of dedicated dinner ladies who served up some of the most delightful food to found in a Surrey prep school. In fact, he even won an award for it. Hard to believe, but he put every bit as much effort into his food as I would imagine a chef in a Michelin starred restaurant and churned out top notch traditional British favourites, in school dinner format. 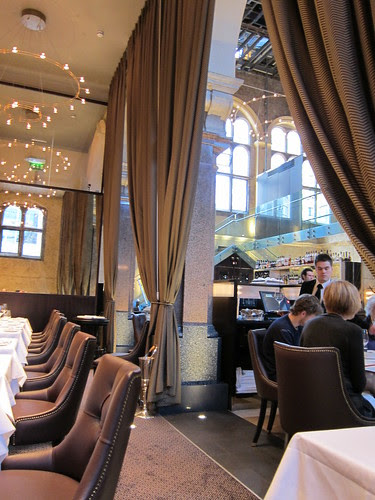 Which brings me onto La Chapelle. My little meander may have seemed a little off topic, but the airy setting for the Galvin brothers latest venture just so happens to be based within an old school assembly hall. The hall has been sensibly transformed into a stunning and sophisticated space (although I am still slightly put off by the toilets being located above the kitchens!) and is patrolled by a legion of bow tied waiters. A great first impression.
On my first visit, all was going well until we began to wield our cameras (so before we had eaten anything). We were promptly informed that the restaurant operated a no camera policy, leaving me totally deflated. As a blogger, I just don't get why some establishments don't let you take pictures. After all, when you see the effort the kitchen has made into the presentation of each dish, surely they would want their hard work to be remembered? What galled me more was not the no photo policy, but the seeming arrogance of the staff. Wearing a fake cringing grin, we were regaled tales of how many critics had come to the restaurant and were able to enjoy the "exquisite food" without the need to take pictures and had given them glowing reviews. I found the fact that they were telling us how great they were before we were given a morsel to eat slightly hard to swallow, along with the attitude of the sneering waiter. 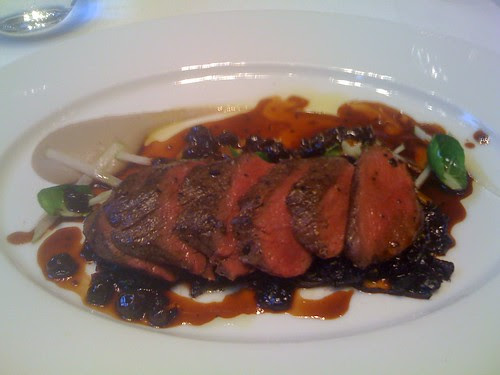 Although it took me a while to recover from such perceived arrogance, I am happy to say that the food was good. Very good actually. A starter of smoked duck & chestnut velouté was meagre but highly flavoured and led nicely onto the star of the show, a roast saddle of venison. I'm not one for conformity and stealth picced my main with my iPhone. Beautifully constructed, it had to be shared with the world. I soon tucked into the most succulent and tender pink venison which was sat on tart blueberries and sour red cabbage. Sweet chestnut puree helped balance the dish and for one split second, under the influence of such tasty meat, all was forgotten.
Unfortunately, the food alone cannot paper over the cracks. There were multiple inconsistencies with service, food being slow, clearing plates whilst other people were still eating, leaving us waiting when all we wanted to do was order. The list goes on and the management seemed a little shocked when we asked to removed the service charge (which they duly did with a little fuss, but were quite apologetic after). 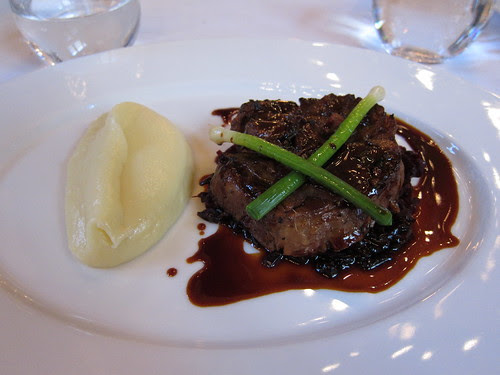 They must have done something right, as I proceeded to return the week after, with my mother in tow for mothers day. Thankfully, the meal went a lot smoother, albeit with the obligatory long gaps waiting to be served. I'm not sure if they had changed their approach to cameras in the last 7 days, but I happily snapped my meal with no interruptions. We all ordered off the prix fixe (£25 for three courses) and although the food was less intricate, it was no less enjoyable. A mushroom veloute was deep and earthy whilst lifted by a spoonful of creme fraiche. My main of lamb shoulder was unbelievably tender and had a small portion of rich mash. I sense butter had a major part to play. A dessert of rhubarb crumble was satisfying although a tiny bit more sugar wouldn't have hurt.
I think it's safe to say that I really enjoy La Chapelle. The service may not deliver on all levels, but the waiters are on the whole friendly and mostly accommodating. As for the food, well, I love it here. Twice in a week says it all really and I actually look forward to my next visit. Sorry Adrian, but I think this place just pips you.
Galvin La Chapelle - 35 Spital Square, London, E1 6DY

I did enjoy my meal, but felt perhaps that the service was a little up-tight. Luckily, though, had no trouble on the cameras front, and managed to snap photos of most of my food. On the other hand, I tend to try and be discreet about taking photos, so perhaps they just didn't notice?

The service sounds bloody terrible - for those prices, that really shouldn't happen.

Let's hope they continue to listen to feedback and to act on it in a positive way. The food sounds cracking, but they won't win friends with slow service and other niggly inconsistencies. Thanks for the review - I think there are enough positives there for me to think about making a visit...

I reckon even the numbnuts wait staff here know better than to kick up a fuss over photos on Mothers Day.

They are lucky u gave it a second chance, i wouldnt have. The food sounds scrumptious though

Yeah I wouldn't have given them another chance either! I wonder if they saw you taking photos the first time and assumed you wre a blogger so they put a stop to it. When you were with your mum though they thought perhaps you just wanted to remember the occasion? Who knows. Anyway the service sounds horrendous. I mean, clearing people's plates when others are still eating - that's such a basic error!

I also like Galvin La Chapelle and didn't get told off for taking photos. Are you using a DSLR or a P&S, out of curiosity?

Did your mother enjoy her meal there, too?

Maybe the issue is using an SLR which a restaurant could argue is distracting to other diners experience? Although the photos are not so good, that is when a point and shoot can come in handy.

At the same time, restaurants should be more supportive of the free publicity they get from food bloggers. As for the food, the £25 set lunch sounds like great value especially on Mothers day - hope your holiday is going well.