Panda Panda. So good, they named it twice

Pandas. I've always had an affinity for them. Not because they, like me, are Chinese. Definitely not because of this video (although it never fails to make me laugh).

No, whenever I think of Pandas, I think of the days I happily spent in university. Panda, you see, was one of my nicknames.
In my younger and more wayward days, I was often dragged to the uni bar where we partook in various inane drinking games, with the sole intention of leaving as unsteadily as possible. In the process of these aforementioned games, I would get redder and redder, forming strange red patches all over my body. My Chinese genes reacted badly to the alcohol and reminded me of this by making me feel sick and look stupid. Not before long, I would have red patches forming all over my body, as well as around my eyes and I was affectionately christened "Panda". 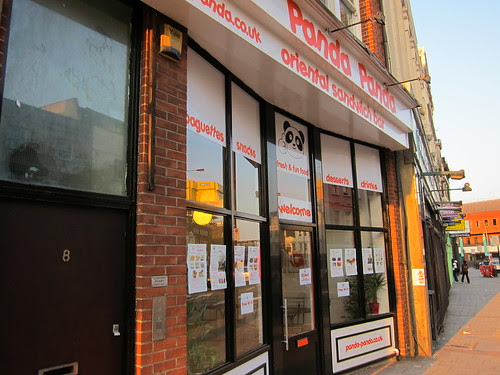 Approaching Panda Panda for the first time, that was all I could think about, those stupid red patches. Thankfully, not only am I less of a booze hound (ahem), but I appear to be far more tolerant of alcohol in my old(er) age and those red patches are no more. Inside is a simple cafe selling treats from the Orient. With a menu focused around its bánh mì (Vietnamese baguettes) and street snacks, it's cheap and the friendly staff certainly make it cheerful. 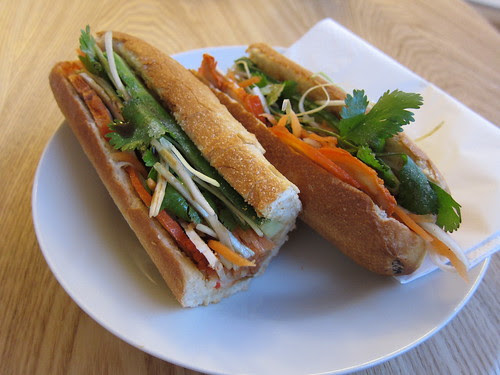 Throughout the evening, we witnessed a stream of locals and students (Goldsmiths College is but a mere stroll away), come in, order and leave. The place is primarily a takeaway, although there are a few tables for those who fancy eating in (like me). Each baguette is made to order and as bánh mì go (I am far from an aficionado), I thought they were pretty decent. Filled with pickled veg soused in fish sauce, hints of chilli and filled with pork, a simple but delicious meal. 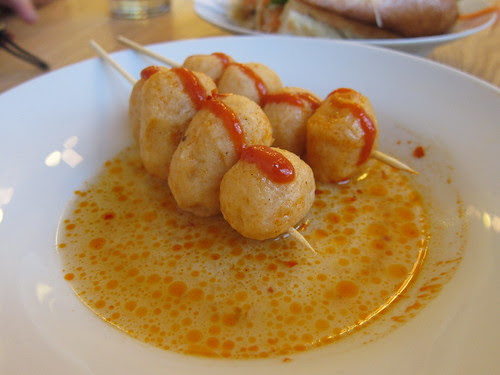 We also decided to try the fish ball, which unlike many fish balls I have tried, actually still retained some flavour of fish, and the pork noodle salad which was pretty average and probably my least favourite dish of the evening. Desserts of mango sago and tofu fa (soft tofu in sugar syrup, basically) finished us off and we waddled off into the night, just as Panda Panda started getting busy.
I wouldn't call Panda Panda a destination restaurant, but it's a nice little cafe doing their own thing. It's perfectly located as it appears to have a steady flow of service from the nearby university but also saw a nice balance of locals tucking in. It's crazy cheap (nothing is above £3, if I recall) and is well worth a visit if you happen to be in the area. Now when I think of pandas, I have one more memory to add to that list (Oh, and red pandas. As they are definitely the most adorable animals on this planet).
Panda Panda - 8 Deptford Broadway, London SE8 4PA
Posted by tehbus at April 16, 2010

I had banh mi here last weekend. Found it to be quite pleasant and quite reasonable bread, but there seemed to be a distinct lack of pate. :-(

Like the look of this EuWen. I do have a tendency to cross town for little Vietnamese cafes, especially those which aren't marked out as destination places.

Anyway, more importantly, I will definitely be calling you Panda from now on.

@HiL - Actually, that was noticed by my dining companion! It didn't bother me that much, but I believe that a real banh mi needs a fairly liberal smear of pate.

I thought you must have earned the nickname b/c your mascara would always run, giving you panda eyes ...

I enjoyed the post - I'm guessing you don't recommend leaving N7 for the pleasure though?

Not much of a drinker myself but I can do it - my brother got the red gene, MWAHAHAHA!
Less amusingly, he got the brains and good looks.