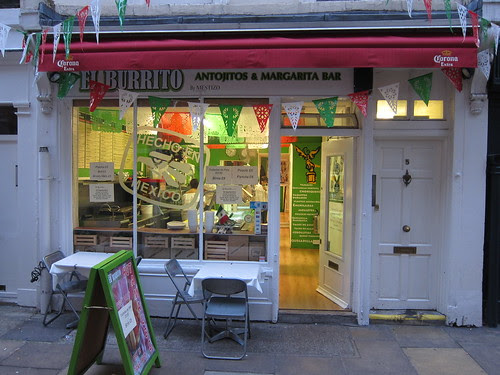 The 15th of September is Mexican Independence day, and in order to celebrate such a joyous occasion, I was led to a small restaurant priding themselves on "antoijitas and margaritas", translated loosely as snacks and booze. Above and beyond your standard burrito fare, the menu is extensive and contains lesser known Mexican delights such as flautas and tamales. Do not be deceived by the slightly tacky frontage and ramshackle appearance, this is a place run by passionate Mexicans, offering out tasters of their frozen margaritas as if it were water. 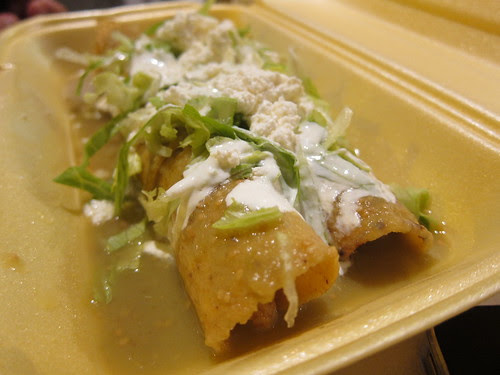 On this occassion, we took occupancy outside and tried to take advantage of the slightly milder weather to dine al fresco. After copious amounts of frozen margaritas, we proceeded to dive into the extensive menu. Flautas are a must. Rolled up tacos, squeezed tight with filling (in my case, chicken) and then deep fried. Follow this up with a dousing of green tomatillo salsa and what you get is very good indeed. Especially that salsa, zingy. Other dishes on the table included tamales, and a pork trotter stacked taco, as well as an array of other taco and fillings. It was all very good, and up there with the best I have had in London. The only complaint would be a slight lack of seasoning, but it wasn't so bad that it put me off.

We rounded off the evening with some great entertainment in the form of mariachi's, who managed to get the whole alleyway where they are based joining in, and some great Mexican dancers. These are clearly not a daily occurrence, which is a real shame, but was a great way to enjoy Mexican Independence day. All that were missing were Mexicans touting sombreros on horseback, firing rounds off into the air. I had never even heard of El Burrito before, such a ridiculous name normally puts me right off, but the food is good and is definitely one of the better places to go and eat Mexican food in London. 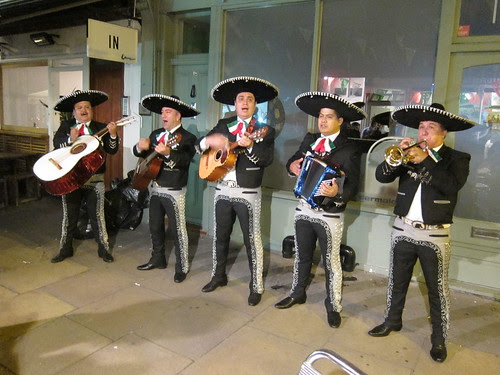 And finally, click here for a photosynth of it all!
El Burrito - 5 Charlotte Place, London W1T 1SF

In an area densely packed with burrito joints (freebird stall, el burrito, Benito's Hat) El Burrito is my favourite. I had no idea they did those other bits though. Lunch is sorted.

Love, love, love the mariachi band. Also loving the fact that there are so many great burrito joints in London now.

I am agree with @gourmet chick.