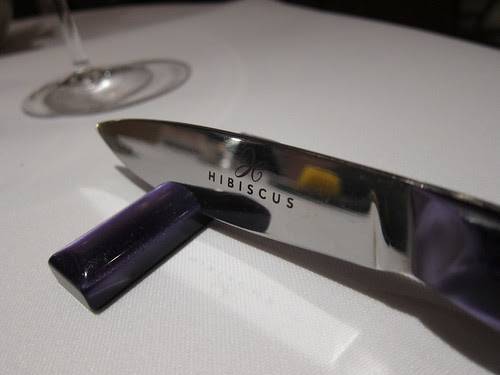 Whenever I spend any of my holiday time in London and not abroad, I invariably end up hunting for some good places to eat. The capital is awash with great lunch deals and these “holidays” are one the only times that I get to indulge. Hibiscus is a great example. A popular two Michelin starred restaurant where the three course a la carte will set you back a royal sum of £75. Not necessarily nosebleed territory compared to some of its neighbours, but still steep compared to a very affordable £29.50 for their lunch menu. 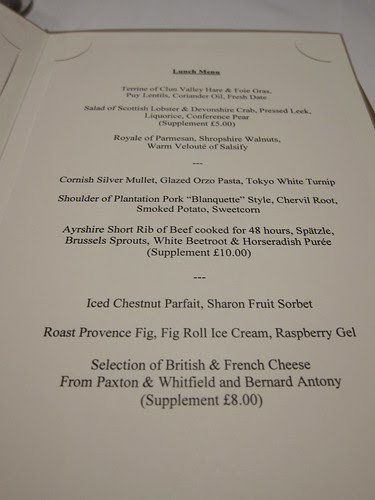 As sister number 2 was also off work, and she enjoys food almost as much as I do, she decided to join me on various jaunts during a week of eating (which would include a trip north to Birmingham and one east to Seasalter). The dining room was much smaller than I expected, with about 15 tables spread out over the compact dining room. I found the island in the middle of the room (where much of the food went when it came out of the kitchen) a little odd, but I guess it was fairly practical for distribution purposes in a small dining room. Between the two of us, we managed to cover off most of the lunch menu options. 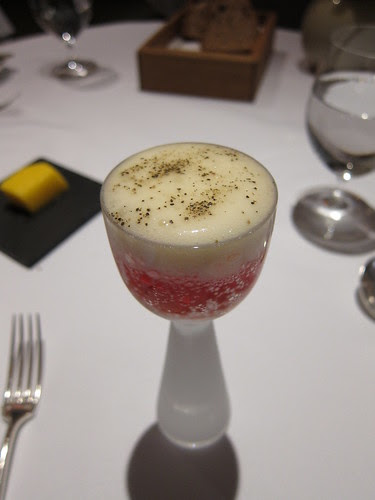 We were first brought out what we were told was a Hibiscus fizz with a pineapple foam, which was ideally to be consumed in two mouthfuls. Innocuous enough and the first mouthful brought a pleasant taste of hibiscus with a slight hint of pineapple. The second was far more interesting and a lot more unexpected, as we encountered some spherified (sp?) pineapple juice, which burst in the mouth and flooded your mouth with pockets of tangy pineapple juice. In the words of Rob Brydon, “my bouche was amused”. 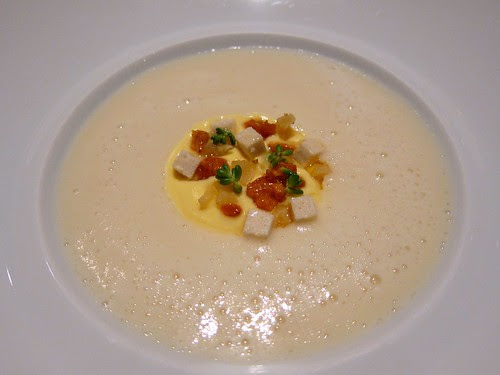 The starters arrived and my royale of parmesan was crowned with some candied walnuts and doused with a warm salsify veloute. The strong flavour from the parmesan slowly melded together with the veloute, and with the walnuts adding a different texture and pockets of slight sweetness, I thoroughly enjoyed this dish. A good balance of flavours and textures. My sister’s crab and lobster salad (£5 supplement) was pronounced as highly enjoyable, although she was slightly put off by the intensity of the little dabs of liquorice on the leeks. With my sister “calling dibs” on the blanquette of pork, I opted for the equally appealing 48 hour cooked Ayrshire rib of beef (£10 supplement). Served with an intense but absolutely delicious white beetroot and horseradish purée, the beef was as tender as you would expect a piece of meat which had been cooked for two days to be. Again, I thoroughly enjoyed this dish, but with a hefty £10 supplement, I would have expected a little more from this. More puree than just a little dab would be a good start. Sister’s dish was excellent as I expected and I was filled with a little bit of jealousy, although I did manage to sample a good few mouthfuls. The smoked mash was plentiful and a little out of place, with the strong flavours detracting from the real star, which was the perfectly cooked pork. 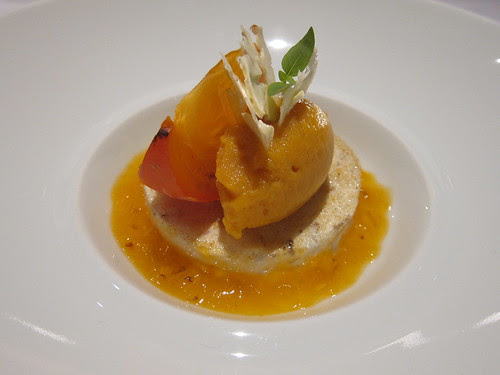 So far so good, but unfortunately it all went downhill for me at this stage. My dessert of iced chestnut parfait with a Sharon fruit sorbet was just plain weird. The flavours were all rather muted but incredibly one dimensional and lacked any real penetration of flavour. I can’t criticise the execution, just the flavours which didn’t agree with me at all. My sister’s fig dish wasn’t really to her taste either, but I thought it was pretty decent, with well cooked figs and a punchy raspberry sauce/gel. 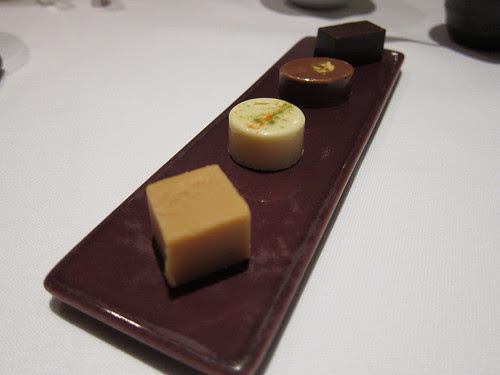 I was disappointed with a sad ending to what was otherwise a pretty decent meal, and opted for a cappuccino to drown my sorrows. What arrived was such milky drivel with no discernible coffee flavour that Starbucks down the road would have been embarrassed to serve it. The petit fours that accompanied it included an over salty salted caramel, a smoked fudge which tasted of smoked haddock and a weird herbal white chocolate truffle.
As I have got older, sweets have swiftly become my favourite part of the meal and such a damp squib of an ending left me with a bad taste in my mouth, regardless of how much I may have enjoyed the first two courses. And what started out at £29.50 set lunch soon adds up with all the additional supplements. Don’t get me wrong, you can eat well without all the supplemental dishes, I just don’t see the point of having a lunch menu when a third of the menu contains a significant additional cost. All being said, the quality of the cooking cannot be disputed and I enjoyed much of the meal I was presented with. Just sort out the desserts and the coffee.
Hibiscus - 29 Maddox St, London W1S 2PA

I have ranted before about the issue of supplements on a fixed price menu. It annoys me no end. The idea of such a menu is to offer diners the chance to enjoy the restaurant's skills at a fixed (and usually more affordable) price. It's surely possible for the restaurant to select dishes that can ALL come in at the price so that a diner wanting to stick to budget actually has the full choice on the fixed price menu and is not left with a choice of either a dish they don't fancy or paying significantly more.

For those who want to pay more, that's what the a la carte is for!

Totally agree with you on the petit fours and coffee: so strange and inedible while the latter was terribly watery (I ordered an espresso). Shame they still haven't fixed it one year on.

@Kavey - Couldn't put it better myself!

@Su-Lin - My sister left all of hers with one bite taken out, and the coffee is seriously the worst I have had ANYWHERE in London. Terrible.

How strange about the coffee. I'm off to Hibiscus on Saturday night - I'm really looking forward to it, but will make sure I've had at least 1 good coffee for the day before I go!

How very odd indeed - you'd think a high end place like that would get coffee right.

That supplements business really annoys me too on set priced menus.

I absolutely love Hibiscus (http://bit.ly/TPFP_H) even the petits fours - especially the petits fours, in fact, though the smoked fudge I could take or leave. I do completely agree though about supplements on set menus, especially as high as £10 - one would expect a French chef to be able to grasp the concept of 'prix FIXE'!

I'd be intrigued, curious to try the Ayrshire rib of beef. It's always interesting to capt the diff of taste in beef from 1 place to another (eating beef in Australia Vs eating it in Argentina was among my most memorable carnivore moments)