The Sportsman, Seasalter: A day out at the seaside 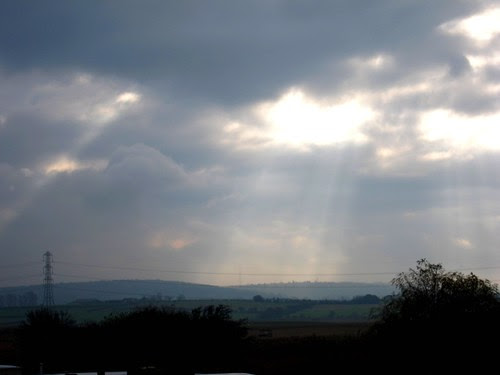 Part of my epic week off of eating included a long awaited visit to Seasalter and a lunchtime session at the Sportsman. After having witnessed my friends one by one making the journey to the coast, and having missed out on a visit on more than one occasion, I was desperate to get there. And get there I did. 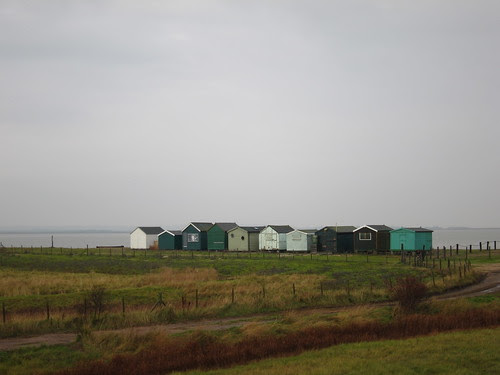 With my sister at the helm, we bombed our way down to the Kent coastline in my mums car, keen not to suffer the same debacle as we had at Purnell's the previous day. We were clearly too keen as we rolled into the car park nearly an hour before they opened, and walked around in the November morning for a bit instead. This clearly didn't last long as the sea breeze and overcast weather engulfed us, so we entrenched ourselves in the warmth of the car until the front doors opened. 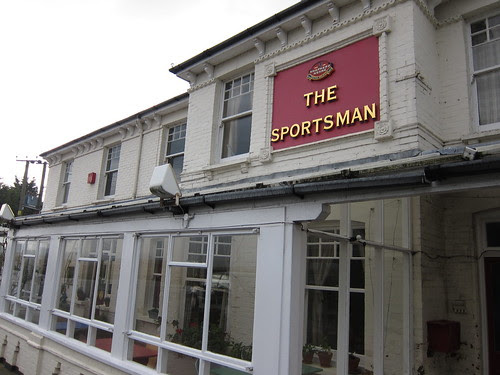 Joined by Matt and Andy, we waited patiently, and at 12 o'clock, on the dot, we were welcomed in and sat in front of the roaring fire with a pint of red ale. No sooner had we supped a few sips, and then the food started to roll out of the kitchen, with most of the ingredients all extremely local. We were in for a long and exciting lunchtime... Pickled Herring and Pork Crackling
Yep, I ate herring. And you know it wasn't so bad. Together with the sweet relish, crème fraiche and soda bread that it was on; I managed to eat it, which is praise alone for herring. The pork crackling was supreme, not overly salty and not overly break-your-teeth hard. Served with apple and mustard dip, perfect to get your taste buds tingling and your appetite flowing. 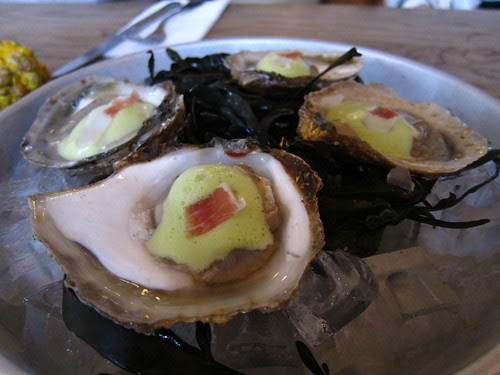 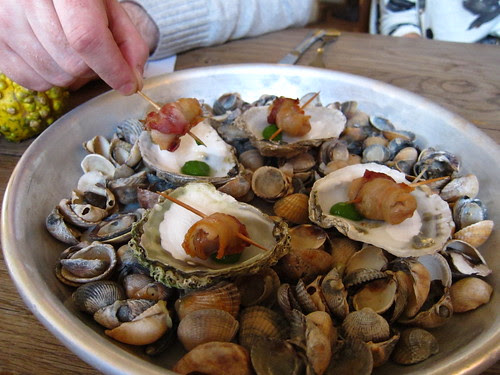 Oysters - Apple foam and ham, Angels on horseback
Of all of the fruits of the sea, it is the oyster I have feared the most in the past, but if they all taste as good as these did, the future is bright. The first lot were raw and very fresh, the only way to eat oysters I am told. With the apple foam hiding the sight of the mollusc, I dove in and the meaty flesh was salty and creamy, tasting very much of the seaside. The fact that it didn't repulse me was a start, and the realisation that I was actually enjoying it was a revelation. The apple foam just gave the mouthful a fruity hint, and the home cured ham added an additional flavour and texture. By the time the next lot turned up, I was fully prepared and ready to go. The "Angels on horseback" were oysters wrapped in bacon and cooked, and were an absolute revelation for me. Served with a dab of parsley sauce, I wolfed mine down; my fear of oysters apparently had evaporated into the ether. 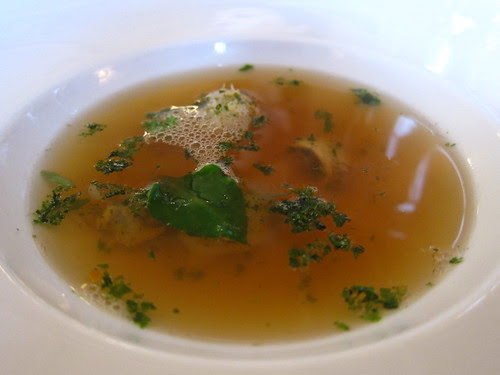 Seafood broth
After a brief interlude of bread (which included some of the best focaccia I have ever tasted), we were brought a shallow bowl with various morsels of seafood placed very deliberately around the bowl. I took a deep breath (as I so often do) and the smell of the fresh seaside was overwhelming. I could have been outside sitting right next to the shore. A broth made from the bones of the turbot we would receive later in the meal was carefully poured over the seafood, producing a light and delicious soup. 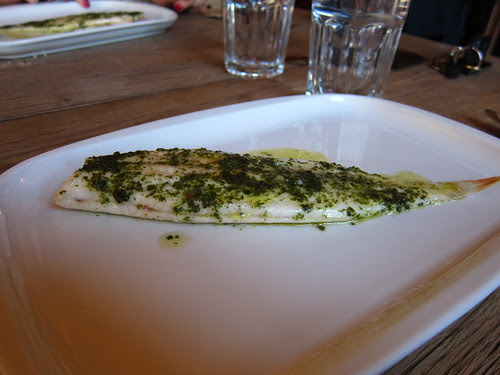 Slip sole with seaweed butter
Next, more seafood, but this time in the form of a delicate slip sole, cooked perfectly and doused in seaweed butter. The flesh needed minimum prising away from the bones, and the slightly irony seaweed butter lifted the fish. Perfectly simple, perfectly executed, unbelievably tasty. 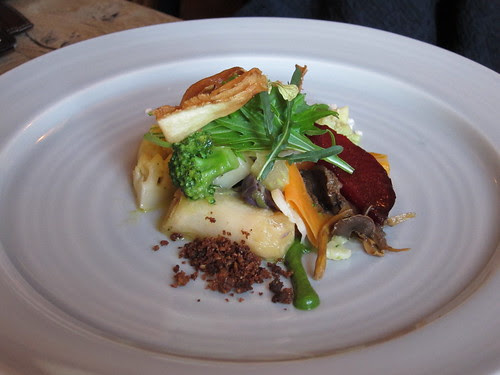 Autumn Salmagundi
Who would have thought that a purely vegetarian dish would be my favourite? Originating from the 17th century, it is essentially a salad made with whatever you can lay your hands on. This version uses up a selection of autumn vegetables, all cooked in different ways, some raw, some boiled, some fried. The poached yolk at the bottom was the icing on the cake, a fantastic dish, hard to describe, one that just needs to be tasted. 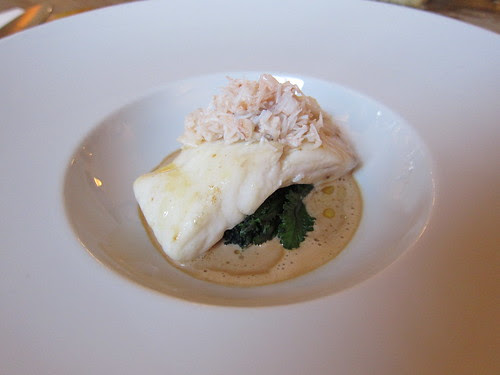 Braised Turbot with Crab
After a meaty interlude of the Sportsmans own ham, we moved on to our last fish dish, a perfectly cooked piece of turbot sitting on greens in a bisque sauce and topped with delicate flakes of white crab. This dish just emphasised why turbot is considered the king of the sea, the generous steak so meaty and packed with flavour. 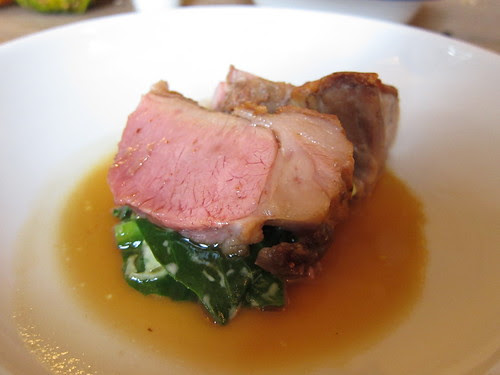 Lamb
The next and last savoury course was a symphony of lamb. First, we had slivers of bread crumbed lamb breast brought out with a slightly overly sweet mint sauce, not really to my taste. However, the trio of lamb that followed was simply stunning. Three different cuts, once again beautifully cooked, served in simple gravy. Just like all the dishes that preceded this one, uncomplicated, well cooked, letting the flavours of the food talk for themselves. 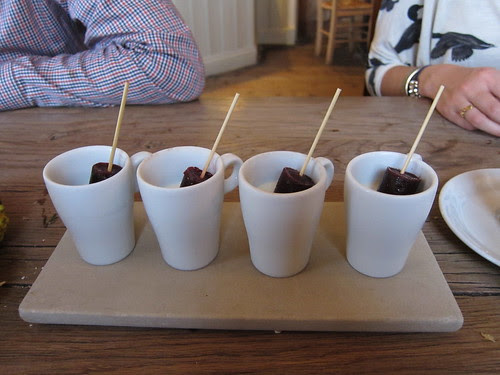 Blackcurrant Lollipop and Cake Milk
So concluded the savoury courses, and at this stage we were severely flagging. Stuffed to the gills full of excellent food, we were reinvigorated by the arrival of the blackcurrant popsicles dipped in cake milk. The popsicles could have done with packing more flavour, but the cake milk was a revelation, tasting as if someone had chucked a cake into a blender, added milk and juiced it. 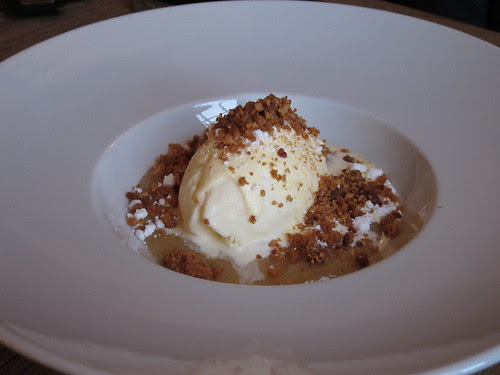 Iced cream cheese and pear
Another revelation and one of my favourite dished of the day. Ice cream made from cream cheese mixed together with a smooth pear puree, and added crushed biscuits to add texture. Such a wonderful combination and a wholly new for me. I must have been up to about a 3rd wind by now and powered through.
By now, we were totally beat and even with the big finale of assorted desserts being absolutely fantastic, we threw in the towel (after we had a taste of all of them first, of course). We were first in at 12 and almost the last lot out at 4pm. 4 hours of non stop eating; I have never felt so full yet so happy. It may not be in London, but is a mere train ride away (or car journey if you're lucky enough to know someone who is willing to drive you) and will serve you some of the best food you will taste. The tasting menu at a mere £55 is a bargain and although they only serve it during the week, I heartily recommend you take a day off and enjoy a day at the seaside. You won't you regret it.
The Sportsman - Faversham Road, Seasalter, Whitstable, Kent CT5 4BP

Hooray! So pleased you enjoyed it as much as you did.

I've never seen a bad post about this place. Really need to get myself down there as looks gorgeous.

Ah and now I see the OYSTERS which have turned you *yay* and also the cake milk!

Lovely post and photos. Thanks for sharing. Great to see you enjoying oysters. Will have to get out there soon!