Over the Summer, we will be seeing the Festival of Britain revived on the South Bank to celebrate it's 60th anniversary. As well as a variety of exhibtions and activities, we are seeing a few foodie related events springing up. We have already seen the street food festival which happened earlier this month, and the recent opening of Dishoom Chowpatty Beach, and now we have the arrival of the Pitt Cue co. Influenced by American BBQ culture, they are bringing the "Cue" to the Southbank. 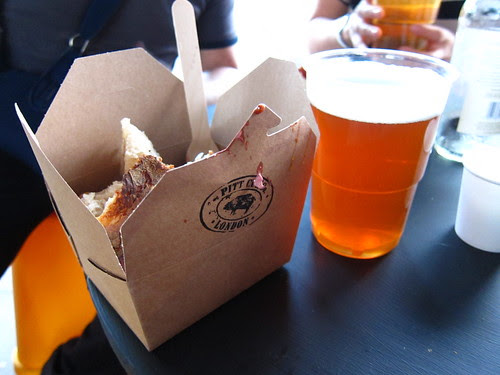 Visiting on the first day of opening, we ordered a bit of everything and took our seat on the little yellow stools. I am told that there will be new items constantly added to the menu, but the three main dishes will be consistent (being pulled pork, ribs and rotisserie chicken). In my box I had pulled pork, root beer beans and coleslaw, drizzled with a few home made pickle shreds, and even with my current state of impaired taste buds, I could taste the complex flavours of heat, sweet and smoke in the BBQ marinade. Smoked offsite for 15 hours and with a mini smoker onsite, the pulled pork was some of the best pork I have experienced in London. With a pint of Sambrooks Wandle and a mini cup of crackling, this was an awesome way to spend a Friday afternoon. 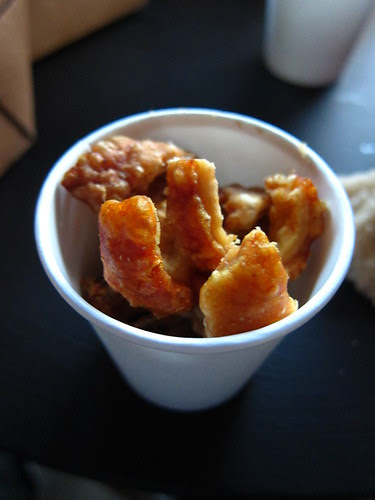 Run by Tom (ex Blueprint Cafe) and team, there is a good pedigree behind the team, which really shows itself in the standard of the cooking. This place really embodies two trends in London this year, the focus on food from America (burgers, shakes, ribs, BBQ etc...) and pop ups (of which there have been more than I can even remember), and nails it. Before it opened, I was saying that there are few things that I have been more excited about this year, and on my first outing, it certainly didn't disappoint. Make your way under the Hungerford bridge, eat pork, drink beer, be happy.
Pitt Cue Co - Under the Hungerford Bridge
Open 7 days a week, 12-11pm. Follow @pittcueco on Twitter for updates.
Posted by tehbus at May 22, 2011

I'm there ..... The quality of American style Bar-B-Q has improved a lot over the years. Nearly gone are the days of those god awful sweet so called bar-b-q sauces into something a bit nearer the mark ....

I've seen a couple of posts on different blogs on the same place . . . looking forward to trying it out. What was it about their pulled pork that you liked so much? And did you try out the milkshakes?

@Mzungu - I think the balance of the sauce here is just right. Sweet and tangy with a hint of heat. Perfect for slathering.

@ AiL - I thought the consistency was very good, soft but still maintaining texture, and not soggy like some I have tried recently. The sauce has a good consistency, with little flecks of heat, whilst being sweet and tangy. Didn't try the milkshakes, but I will be back many times.