Posh Car in Camberwell...for one night only

Since the op, I've been gradually putting on more and more weight. Day by day, my clothes seem to get a little clingier. There is so only so much I can blame on the tumbe dryer so I decided to take evasive action, joining the gym was the only way to go. Now this may not seem too hard to do, but the staff at Camberwell Fusion seem to try and make it as difficult as possible.
Three trips to the gym later, I am registered and have my card but am still not allowed to use the damn thing until I have had an induction (which I cannot attend till next week). Don't they want me to return to my former svelte adonis like physique?

Anyway, on the way home from my latest attempt to join, I passed this beauty outside my house: 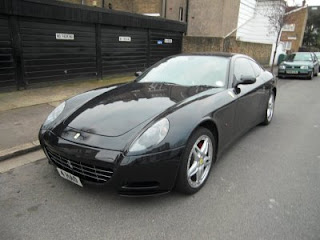 What was it doing there? Who knows, but as it was parked just off the main road in Camberwell, it was asking for trouble. My sister strongly suspects that we live next door to drug dealers which would explain a few things (namely the Ferrari and the BMW's parked outside).

Just as it had appeared, the Ferrari disappeared into the night and was nowhere to be found when I got up in the morning.
Posted by tehbus at March 31, 2009