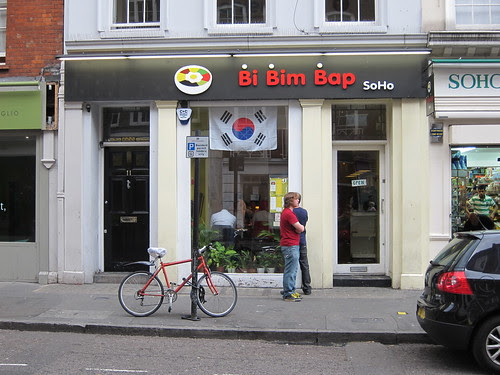 I've always had a bit of a thing for Korean food. It's mainly how a lot of the food seems to focus around grilling meat, rice and chilli, three of the best aspects of food you can get. Sadly, in London, the only place where I had some really enjoyable Korean food was at Koba (before I went to Arang, but that's another story), and that costs a pretty penny by the time it all adds up. I need to venture down to New Malden for good authentic Korean food, I am told, but that seems a journey too far at the moment. 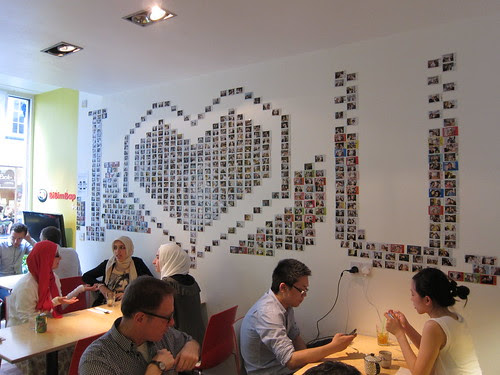 Thankfully, Bibimbap, specialising in the dish it embodies within its name, is a pretty decent stop for a bite to eat. According to wikipedia, it means "mixed bowl", which is pretty apt as more often than not, it's a bowl filled chock full of veg and meat, sitting on a bed of rice. Personally, I like the "dolsot" versions. Served in a freakishly hot clay pot, the rice starts to stick on the bottom of the pot, crisping up slightly, giving an added texture. 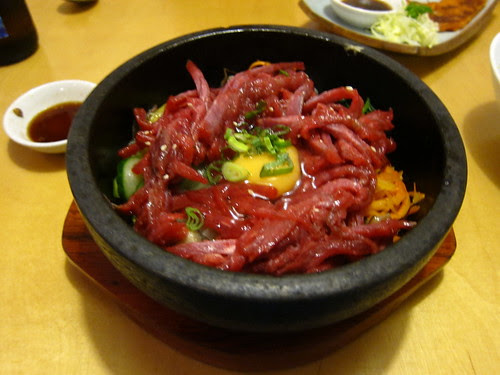 The yook hwei dolsot bibimbap takes this another step further. Adding in raw strips of tender beef, and a raw egg, you slowly cook the meal within the bowl. Eat the beef raw, if you are that way inclined, but I like to douse mine in chilli sauce, give it a good mix and leave it to rest for a few minutes. Fear not, as even minutes later, the bowl is still as hot as the sun and you will spend the next ten trying to balance scoffing all the delicious flavours and not scalding the insides of your mouth so you wont be able to taste anything for the next week. 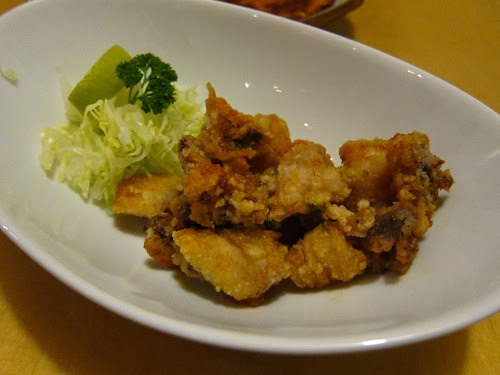 On this visit, we also ordered sides of kimchee pancake and chilli squid. Both nice enough, but hardly heralding the cost (around a fiver each). I would stick to what it says on the tin, Bibimbap. As hot as the sun, and as comforting and enjoyable a dish as you can find on this earth. I like Bibimbap for its simplicity, and the staff are lovely. Take a look around the room and you will see the Polaroids of hundreds of happy punters on the wall. My face hasn't been added there yet, but goddamn, I'm going to keep going until they take my bloody picture!
Bibimbap - 11 Greek Street, London W1D 4DJ

Good lord I love yuke/yuk hui, but I've never had "yook hwei dolsot" in a hot bowl. I can only imagine it's something special. Given I find myself wandering Soho feeling hungry a lot I think I'll have to stop in here!

I love the danger and excitement the red hot bowl adds to the meal! Sounds pretty tasty as well :^)

@Nancy - It is an excellent pit stop and will feature highly on my list.

@Pavel - I have foolishly tried to see how hot that bowl is. The answer is very hot.

Love, love bi bim bap. Particularly how the rice gets crunchy like the bottom of a paella. Thanks kindly for the heads up. I think I know where we're heading this weekend.

Just ask for them to take a picture of you and one of the staff will, they have a Polaroid camera handy.

Unfortunately I feel like this place has deteriorated a little since it originally opened. The portion sizes are now smaller, and the rice is now too greasy as well. A shame, because it was a really viable cheap Korean option at one point, but now no longer... :(